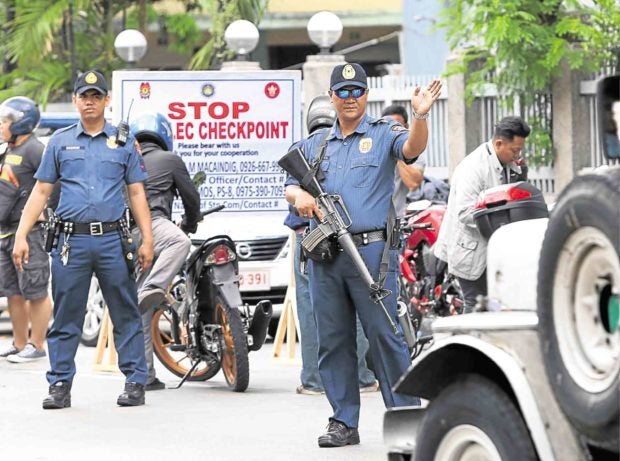 SECURITY CHECK Policemen are stationed at a Comelec checkpoint in Manila as candidates for the barangay and Sangguniang Kabataan elections file their certificates of candidacy in this file photo. INQUIRER / MARIANNE BERMUDEZ

Before the campaign period for the 2018 village and youth council election starts, the Philippine National Police (PNP) identified 7,638 election hotspots across the country.

According to the breakdown, the PNP classified 597 areas in the country as red hotspots, 4,970 as orange hotspots, and 2,071 as yellow hotspots.

Hotspots classified as red were areas in “critical situation” while areas under orange were areas with “presence of armed groups and organized movements outside the law.”

Areas categorized under yellow were considered to be areas “with history of political unrest.”

The Autonomous Region in Muslim Mindanao (ARMM) was identified as the region with the most election hotspots under red and orange classifications.

About 438 red hotspots and 823 orange hotspots were identified in ARMM. /jpv