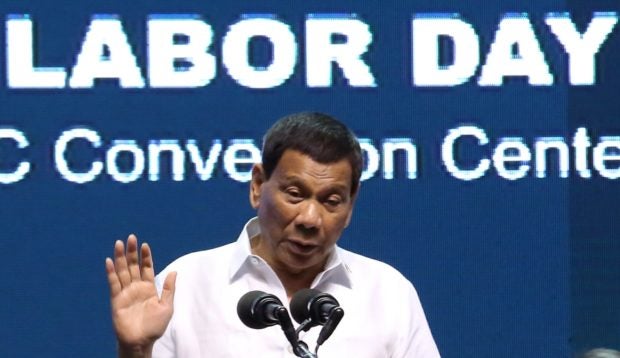 FIRM IN COMMITMENT In his Labor Day speech, President Duterte says he remains firm in his commitment to end “endo,” but he urges Congress to enact a more comprehensive action on contractualization. —JUNJIE MENDOZA/CDN

The EO dismayed labor groups and got some members of the business community worried.

Endo, or end of contract, refers to a contractualization scheme that offers short-term and unprotected temporary work arrangements.

Section 2 of the EO bans “illegal contracting and subcontracting” when undertaken to circumvent workers’ right to security of tenure, self-organization and collective bargaining, and peaceful concerted activities.

Labor Secretary Silvestre Bello III told reporters that other forms of contractualization — like seasonal or project-based jobs of janitors and maintenance workers that can be outsourced — were still permitted.

The EO also provides that the labor secretary may declare specific activities that can be contracted out in consultation with the National Tripartite Industrial Peace Council.

It was Bello who read the entire EO before the President’s speech.

“I remain firm in my commitment to put an end to endo and illegal contractualization. However, I believe that in order to implement an effective and lasting solution to the problems brought about by contractualization, Congress needs to enact a law amending the Labor Code,” he said in his speech after he signed the EO.

The President signed the EO in front of thousands of job applicants and local officials in the IEC Pavilion in Barangay Mabolo here.

He said he didn’t answer questions regarding the EO before, despite a clamor from labor groups, because he had wanted to sign it on Labor Day to make it more “memorable.”

The President also ordered the Department of Labor and Employment to submit to his office a list of all companies engaged in or suspected to be engaged in labor-only contracting.

“To all noncompliant and abusive employers under the so-called cabo, who are engaging in labor contracting, your days are numbered,” he said.

“I have warned you before and I warn you again, I’ll cut off your heads. That’s not right. Stop endo and illegal contractualization,” he added.

The President said he would see to it that laws were strictly enforced.

“The government will not rest until we end this shameful labor practice,” he said.

The order also mandated the labor secretary to inspect establishments to check compliance with all labor laws, including provisions in the EO.

While it’s a step in the right direction, the President’s EO has no real bearing on existing labor policy, said Sen. Joel Villanueva, chair of the Senate labor, employment and human resources development committee.

But at least, “the President reiterated his call to end endo and illegal contractualization,” Villanueva said in a statement.

Senate President Aquilino Pimentel III told reporters that legislating a new labor law would be a priority at the resumption of Congress on May 15. “[It will] focus on ending illegal contractualization,” he said.

Some businessmen had reservations with the EO but nevertheless said they would just have to “live with it.”

The Employers Confederation of the Philippines (Ecop) and the Philippine Chamber of Commerce and Industry (PCCI) said they were worried over the definition of some terms in the EO.

They found the definition of “security of tenure” and the possible loose or abused rules of engagement in the enforcement of certain prohibitions “worrisome.”

“[The] government though must be credited in its serious and sincere effort to craft an EO that meets the expectation of both labor and capital,” they said.

The labor department’s office in Central Visayas is making a list of companies engaged in labor-only contracting in Cebu as well as in Siquijor, Negros Oriental and Bohol provinces. —With reports from DJ Yap and Roy Stephen C. Canivel