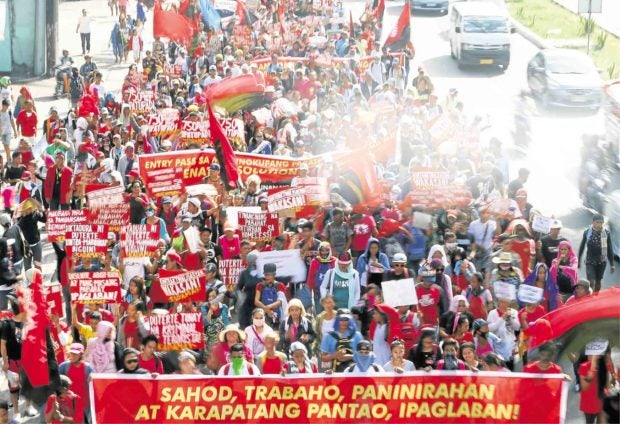 HISTORIC UNITY Erstwhile fragmented labor groups, long divided by politics and ideology, have united to demand an end to contractualization that many employers use to avoid paying full benefits to their workers and bring down their operating cost. —EDWIN BACASMAS

Thousands of workers and activists marched in a May Day rally in Manila and other cities on Tuesday in protest against what they said was President Rodrigo Duterte’s failure to keep a campaign promise to get rid of a labor contractualization scheme.

The rallies were peaceful, but the Malacañang complex was locked down, initially denying journalists’ access as protesters burned the President’s effigy with a sign “Liar King” several hundred meters away.

A pledge to act against employers who hire workers for short-term employment without adequate benefits helped President Duterte win the presidency in 2016.

Shortly after assuming power, the President warned that businesses would face closure if they failed to stop hiring under a scheme called end of contract, or “endo.”

Under the scheme, a worker would be dismissed before he could serve a full six months, denying him the right to become a regular employee with full benefits.

Trade unions say the practice has persisted, particularly in shopping malls and the fast-food industry.

Renato Reyes Jr., secretary general of the left-wing alliance Bayan, said the President had done what other leaders had failed to do in 30 years—unite fragmented labor groups.

“The historic unity of the working class is the direct result of the failure of the regime to bring an end to contractualization, a major campaign promise of the President,” Reyes said in a statement.

About 8,000 police and soldiers kept watch at the protest march on Malacañang.

Police estimated up to 7,000 people, waving flags and carrying banners, took part in the protest in Manila.

More than 9,500 protesters joined the Labor Day rallies in Cebu, Bacolod, Iloilo and other major cities in the Visayas, demanding not just an end to endo but also higher wages and more jobs.

In Cebu City, the President signed an executive order (EO) prohibiting illegal contracting or subcontracting and asked the labor department to submit a list of companies “engaged in or suspected to be engaged in labor-only contraction.”

He asked Congress to pass a law amending the “outdated” Labor Code “to keep it attuned to the realities of our time.”

“I remain firm in my commitment to put an end to endo and illegal contractualization,” the President said. “A mere executive order is not enough. I cannot be a legislator. It is not allowed. But I can only implement.”

Josephine Jaballa, who joined the Labor Day rally in Tacloban City, appealed to the administration to stop contractualization “because aside from the possibility that we will be separated from our works after five months, we are not enjoying benefits entitled to regular workers.”

Jaballa, 42, was among 25 former employees of a poultry farm in Albuera, Leyte, who lost their jobs after their contract ended in January.

“It did not prohibit the existence of manpower agencies that facilitate the contractualization of labor,” Amparo said.

Around 500 workers from Bataan and Pampanga joined the rally at Plaza Miranda in Angeles City.

Workers belonging to Kilusang Mayo Uno (KMU), its allies and other labor groups mobilized thousands more in rallies in Luzon and Mindanao, including about 3,000 in Davao City, where Mayor Sara Duterte-Carpio provided tents as makeshift day care centers for the children of protesters.

They also reported that authorities either delayed or blocked protesters on their way to rally sites.

In Bataan province, police stopped a group of workers from the Bataan free port in Hermosa town, saying the jeepneys they were using were “out of line” and violating their franchises in transporting the protesters who were headed to Pampanga.

KMU reported that 600 farmworkers aboard nine buses from Compostela Valley province who were held at a checkpoint on the highway to Davao City staged a rally instead in Nabunturan town where they were stopped.

Chief Insp. Milgrace Driz, spokesperson for the Southern Mindanao police, said the passengers of the buses were not held because they were protesters.