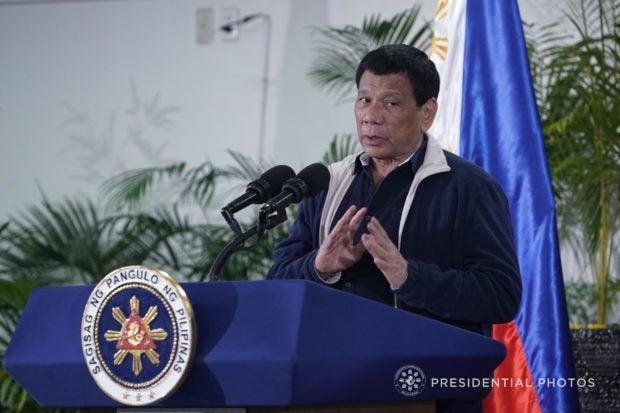 President Rodrigo Roa Duterte, in his speech upon his arrival at the Francisco Bangoy International Airport in Davao City at dawn of April 29, 2018, urged Overseas Filipino Workers (OFWs) based in Kuwait to go back to the Philippines with the assurance that the government will help them return and resettle. The President, however, clarified that OFWs in Kuwait may choose to stay there if they want to. RENE LUMAWAG/PRESIDENTIAL PHOTO

DAVAO CITY — President Rodrigo Duterte on Sunday admitted he did not read particular broadsheets but at least he knew they existed.

“I do not read your paper, but I have been searching for you,” he told a correspondent of a Manila-based broadsheet.

However, the President appeared to have been surprised when Philippine News Agency (PNA) Davao bureau chief Lilian Mellejor introduced herself and her news outfit.

“What’s your? What’s your entity?” the President asked Mellejor.

“Is there such a thing [as PNA]?” Duterte asked.

But he immediately tried to make light of the situation by saying: “The peevish ones would again talk about this tomorrow,” he added as the crowd laughed.

PNA is a government news agency under the News and Information Bureau of the Presidential Communications Operations Office (PCOO) headed by Secretary Martin Andanar.

Since the Marcos years up to the present, PNA has been providing international news agencies and the local media with news reports and official statements from Malacañang and other government agencies.

It has reporters and correspondents nationwide.