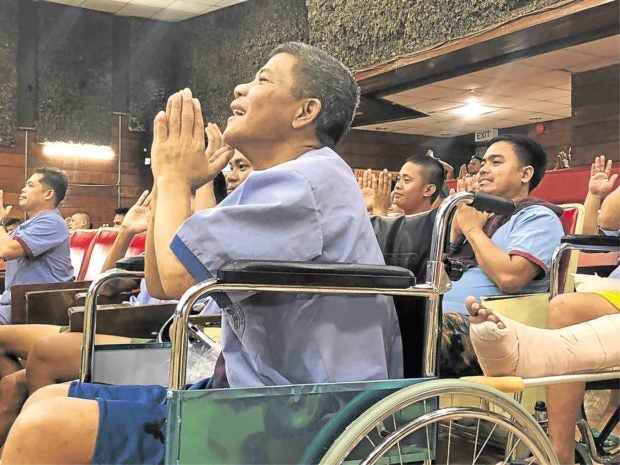 At first, there were only sparse giggles. But minutes later, the awkward smiles turned into guffaws that echoed in the auditorium of the Armed Forces of the Philippines Medical Center in Quezon City.

It was no ordinary sight — or sound — inside the facility along V. Luna Avenue meant to treat soldiers wounded in battle.

But while pills and surgery help heal the soldiers’ bodies, the hospital recently administered what even doctors consider the best medicine for a broken spirit and a battle-weary heart: laughter.

Around 100 military men put aside their tough exterior on Tuesday during a “laughter yoga” session organized by members of  Women in National Development and Security (WINDS).

Unlike a usual yoga session with different poses and relative silence, the hourlong session of Pinoy Laughter Yoga (PLY), founded by Paolo Trinidad, encouraged guffaws and howls of laughter from the soldiers, some of whom were in wheelchairs or crutches.

With proper breathing techniques and the exertion from laughing, a session of laughter yoga can both be an exhausting workout and a moment of release.

Founded by Indian doctor Madan Kataria, from whom Trinidad received his training, the activity is said to improve the immune system and prevent depression.

“Even an afternoon of laughter can take the (soldiers’) minds off their pain and worries from their difficult experiences,” said Theresita Atienza, WINDS vice president.

When he first heard about the program, Sgt. Bonifacio Moncada was hesitant, unsure what he was getting into. Was this going to be a stand-up comedy routine?

The 43-year-old, who has been a soldier for 22 years, was deployed in Lanao del Sur and was manning the municipal hall in one of the towns when the Maute terrorist group attacked their troops in February 2016.

He recalled how they were trapped for hours without reinforcement and how he saw two fellow soldiers killed.

“Around 3 p.m. the next day, we finally got out of hiding.  It was then that I was shot, my right arm blown to bits,” he told the Inquirer, adding that his limb had to be amputated.

But there was no sign of hesitation from Moncada as he raised both his arms, or what was left of his right one, during the laughter session.

“Seeing fellow soldiers die, that’s something we can’t never forget,” he said. “But with this activity at least, we feel that we’ve released some of the stress away.”

Trinidad said laughter could be beneficial for people who had experienced traumatic events.

“The (soldiers) might not admit it, but they might have clinical depression,” he said. “Laughter can help those with post-traumatic stress disorder. It works directly on their brains.”

The family counselor also noted the resiliency of Filipinos despite the toughest disasters.

“Laughter taps the soul,” Trinidad said. “PLY’s approach fosters a connection with God, which can give the participants hope that they will be healed.”

Trinidad said the session could also help raise awareness about the mental health of soldiers. “It is important to reframe their sadness by simply making them laugh and allowing them to have a positive outlook,” he said.

Hospital chief, Col. Antonio Punzalan, noted that while most of their patients’ wounds are physical in nature, the hospital has at least five resident psychologists who assist the soldiers with their mental health concerns.

“We welcome all kinds of support from different organizations,” Punzalan said, adding that the hospital is focused on providing only basic medical care.

Pfc. Eric Gerale Lazarra, 28, said the session helped take his mind off the pain he felt on his right leg, which was wrapped in braces.

In October last year, a bullet shattered his tibial bone during the war against the Islamic State-inspired Maute group in Marawi City.

“I think our laughter can help heal our wounds and strengthen our spirit. It can be stressful here in the hospital,” said the soldier who has been confined in the facility for nearly five months and says he misses his family everyday.

“This experience has at least eased our feelings and allowed us to forget our pain and problems,” Lazarra said. —With reports from Jasmin Jatt Salvacion and Lawrence Llacer