Falling into water Badjaos’ biggest fear before it happened to solons, execs 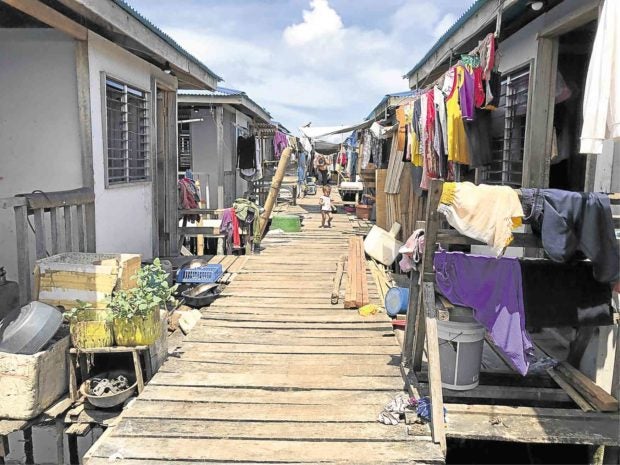 This is Sitio Hongkong, Barangay Rio Hondo, where 240 mostly Badjao families had been resettled after the 2013 siege in Zamboanga City by followers of Nur Misuari. The place was thrust into the limelight after two congressmen, the city mayor and other officials plunged into the water when the footbridge they were crossing collapsed. —JULIE ALIPALA

ZAMBOANGA CITY — Residents of Sitio Hongkong in Barangay Rio Hondo here, mostly Badjaos, live in constant fear of being thrown into the sea when their houses on stilts collapse.

Their plight was thrust into national consciousness when two congressmen, a mayor and other government officials fell into murky water when the footbridge they were crossing to inspect the Badjao settlement collapsed.

According to residents, it was their worst fear coming to life.

Arnadzmi Jamiri, 31, a former migrant worker, said his house would shake whenever he or his children moved around.

“When I walk the house would literally dance,” said Jamiri. “We fear that anytime soon we would pick ourselves up at sea,” he said.

The father of two said he would constantly remind his children to be careful in moving inside their house, made of wood and iron sheets and built atop stilts.

The settlement hosts at least 240 Badjao families displaced by the 2013 attempt by Nur Misuari’s followers to take over Zamboanga City.

They were given houses built by the National Housing Authority (NHA).

Asikal Masiral, 55 and acknowledged as leader of the Badjao community, said residents had been complaining in the last two years about the unstable structures.

“Each time someone from the government comes over to look at our condition, we tell them that the foundations of our houses and bridges are gradually giving off,” Masiral said.

The complaint, however, “fell on deaf ears, maybe because we are Badjaos,” Masiral said.

He said when the Badjaos moved in, the foundations of the houses on stilts were the first subject of their complaints.

Some residents who could not wait for government action started replacing the stilts with bamboo poles.

“For many of us, we were just waiting for disaster to happen,” Masiral said.

“We always pray every day for weak winds and sunny days,” he said.

“Strong winds may wash our homes to sea,” he added.

He said if one house in the settlement gave in, the rest would follow because the structures were built like “domino pieces.”

“Everything is connected to each other,” Masiral said.

Mima Jasani, 34, a mother of eight, said she attached supporting poles to the foundation of her house to make it stable.

“We fear for our children,” she said. She added that her family could land in the water if the stilts of their house gave way.

“Constant exposure to seawater eroded it and it also showed how the foundations were poorly built,” he said.

Mukarram said when the houses on stilts were still being built, Badjao leaders already asked builders to use bamboo, which would be stronger.

Instead, the builder, Limestone and NHA, used wooden planks made of mahogany and gmelina.

Mukarram said residents had insisted that the materials used by the contractor would not withstand constant exposure to seawater.

“It will not take long—a year or two and it will break,” Mukarram said.

They plunged into the murky water that was just then waist-deep because it was low tide.

The group was inspecting the site amid complaints against the use of substandard materials.

The footbridge was built in 2016 as part of a P53-million NHA housing project, said Architect Susan Montano of the NHA central office in Manila.

Loud cracks, then a fall

“Benitez and I were talking about the many issues we’ve noted about the place when suddenly, we heard loud cracks and I was the first to fall through,” Lobregat said. He suffered only scratches.

Lobregat said he was thankful nothing more serious happened.

He said he feared getting impaled by poles protruding from the water “and I was the first one to fall and they fell all over me.” Lobregat was lucky there were no protruding poles.

He and the rest of the party clambered on the collapsed walkway with help from soldiers and residents.

A few minutes after the collapse of the first bridge, the second bridge—where children and women were watching the visitors—also collapsed and they went down, as well.

Benitez said as chair of the housing committee in the House of Representatives, he had been to many construction sites to check for substandard materials.

“This was the first time that I encountered such experience,” he said.

Badjaos living in the settlement, he said, had been spared by the 2013 man-made calamity when Misuari’s followers attacked Zamboanga City “only to be victims of poor housing design and materials.”

Mukarram said residents did not wish the accident on the visitors, but it made officials realize their complaint was valid.

“To our leaders, you saw how these NHA officials fooled our people by putting up poor materials in our housing project,” Mukarram said.

“I am sad that it happened to them but this poor work will never be addressed if we used only our voices,” Mukarram added.

Masiral said prior to Thursday’s accident, a couple already plunged into the water when a portion of the footbridge gave way, but it did not generate controversy.

“This time it created noise because it was the mayor who went down,” he said.

Jamiri said he was looking forward to positive change after the accident.

“We have been complaining about substandard materials used for our housing, yet no one was taking real action,” he said.

On Friday morning, Sitio Hongkong residents rushed out of their homes to find out that workers sent by the NHA repaired the footbridge by replacing materials.

The poles are now made of coconut lumber. “This will not last long, too,” Masiral said. —Julie Alipala