Report on Dengvaxia mess up for plenary discussion, says Gordon 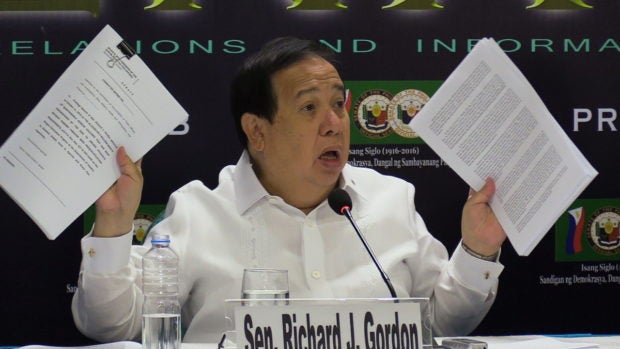 The blue ribbon committee report on the Senate inquiry into the Aquino administration’s purchase of the dengue vaccine Dengvaxia can now be tackled in the plenary after it was signed by a majority of senators, Sen. Richard Gordon said on Friday.

Gordon said in a statement that 13 of his colleagues in the 24-member Senate had signed the report.

The government’s dengue vaccination program became controversial after Dengvaxia’s French manufacturer, Sanofi Pasteur, said earlier this year that the use of the vaccine could cause more severe dengue symptoms in people who have not contracted the disease before.

Gordon said he was happy the report could be tackled on the Senate floor.

“With 14 senators signing the report, I am happy that it will be discussed on the floor finally where it should be discussed. I recognize that not all of my colleagues agree with the report but I am willing to debate and discuss it on the floor,” he said.

According to Drilon, he found no conclusive evidence to support the contention that the reported deaths of young students who were inoculated with Dengvaxia were connected to the use of the vaccine. The matter should be studied by qualified pathologists, he said. —LEILA B. SALAVERRIA