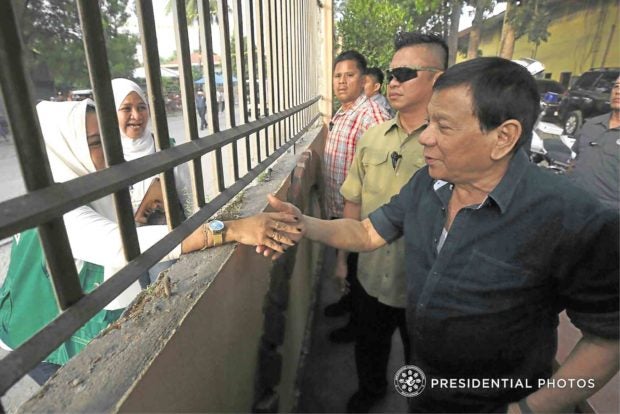 President Duterte interacts with his supporters in Buluan, Maguindanao, on Wednesday.—MALACAÑANG PHOTO

BULUAN, MAGUINDANAO — Once peace in Mindanao is achieved, President Duterte will declare the whole island a land reform area and distribute government land, including military reservations, to the people.

“I’ll give it all to you. You find public land, including those where military camps are situated, that’s yours,” he said on Wednesday during the turnover of some 900 surrendered firearms from various Maguindanao towns.

Large tracts of government lands, he said, have remained idle and have not contributed to the economy. “Nothing will happen to it,” he said. “I will give it all. You plant rubber. You plant palm.”

The President said that in order to achieve peace, the passage of the Bangsamoro Basic Law (BBL) had to be accelerated.

“Let us fast-track the [passage of the] BBL. The BBL does not mean all of Mindanao will be Moro. (BBL) would be like the Liberal or (Nacionalista) Party. It will amplify the voice of the Moro for the national government to listen to,” he said.

President Duterte said he was trying his best to have the BBL passed. “I am promising you, it will pass before May [ends]. If not, I will resign from the presidency,” he said.

Congress will resume sessions on May 14.

The chief executive said he would be a “useless President” if his administration could not solve the country’s problems, particularly the Moro problem.

“I want you to be established. I will talk to Nur (Moro National Liberation Front founding chair Misuari) on what the arrangement would be,” he said. “But you will have a definite Moro territory. All the government land, that’s yours.”

“Let’s continue to talk because if you shoot a policeman or a soldier, they will take up revenge. It will never end and nobody will win. Believe me,” he said.

Trouble will only further drag the country down if such incidents persisted, he added.

“We will end up a poor country forever, fighting each other,” he said. “And neither will firearms do any good for the Moro people.”

“What can it provide your family? Can you educate your family with it? Can you plant your livelihood with it?” he said.

Mr. Duterte said the Moro people should believe him because he was one of them and “because no one like me would probably come again.”

Maguindanao Gov. Esmael Mangudadatu, said the surrender of the firearms was a manifestation of the people’s support for the Duterte administration’s campaign against loose weapons.

Mangudadatu, who lost his wife and several loved ones in the so-called Maguindanao Massacre on Nov. 23, 2009, agreed that guns would not do good to Moro families.

“It will only cause trouble and we have seen that for many years now,” he said.

Mangudadatu said the provincial government would continue to convince people to surrender their guns in exchange for livelihood and the education of their children.

“We have started sponsoring students from families who do not have guns under the Maguindanao scholarship program,” he said.