MMDA: QC traffic to get worse due to MRT 7 works 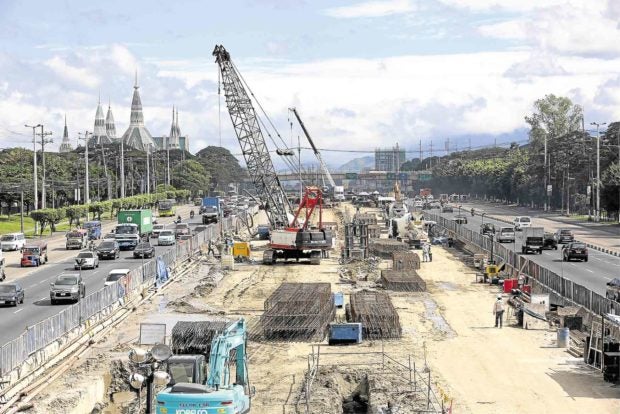 LIMITED LANESA section of Commonwealth Avenue in Quezon City has narrowed, with the construction of the MRT 7 line in full swing. —NIÑO JESUS ORBETA

The Metropolitan Manila Development Authority (MMDA) warned motorists of heavy traffic in Quezon City in the coming days with the closure of several roads due to the ongoing construction of the Metro Rail Transit 7 (MRT 7).

San Juan said that starting April 30 up to July 30, from 5 a.m. to 10 p.m., one-way traffic would be implemented on Regalado, from Mindanao Avenue to Commonwealth Avenue, for the construction of a coping beam.

From May 6 to July 30, from 10 p.m. to 5 a.m., Regalado (from Mindanao to Commonwealth) would be closed to vehicles for the installation of box girders for the MRT 7 tracks.

Starting May 1, the contractor will start the construction of MRT 7 Tandang Sora station, which is expected to cause a bottleneck at the intersection of Commonwealth and Tandang Sora Avenue.

San Juan said the laying of the foundation for a number of posts would also require the closure of three lanes on both sides of Commonwealth for five months.

The project, which also involves the construction of an elevated guideway and the demolition of the existing Tandang Sora flyover, will take up to 13 months to complete, according to government estimates.

May 1 will also see the start of an eight-month excavation work for the MRT 7 underground guideway from North Avenue to Commonwealth. At this phase, two lanes of North Avenue to Elliptical Road will be closed to motorists. —WITH A REPORT FROM JONNABETH ORTEGA