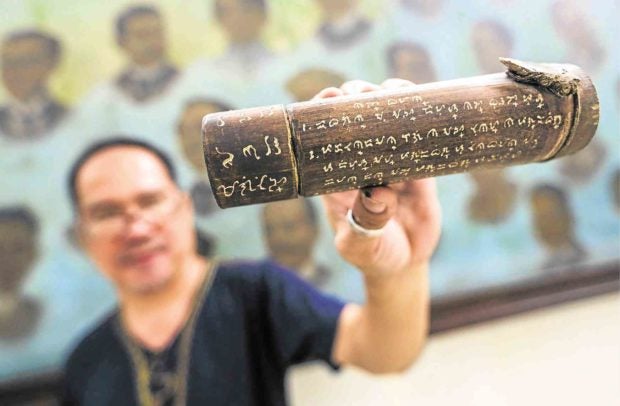 NATIVE SCRIPT A lawmaker has filed a bill to protect the ancient writing system “baybayin,” whose characters are shown here carved on a bamboo stem. —LYN RILLON

“If they want the rest of the country to support the bill, they should drop baybayin from the bill and allow Kapampangan to use ‘kulitan,’ Ilocanos to use  ‘kurditan,’ Visayans to use  ‘badlit,’ [or] allow Mangyans to use ‘surat Mangyan,’” Robby Tantingco said of House Bill (HB) No. 1022, the proposed National Writing System Act.

Tantingco, executive director of Holy Angel University’s Center for Kapampangan Studies, said the measure should not prosper at its current form because it required Filipinos to jump from familiar local languages and writing systems to the unfamiliar, such as baybayin.

Michael Reymon Pangilinan, who wrote the book “Kulitan,” said he was opposing the bill because it protected only the baybayin of the Tagalogs.

“First our indigenous language was set aside and pushed on the brink of extinction when their language was legislated as our national language. Now our indigenous script will also be set aside and pushed to the brink of extinction when their writing is legislated as our national script?” Pangilinan said.

In Bicol region, Leo Emmanuel Castro, executive director of the group Sanghabi, said a neutral term for the national writing system must be used, noting the baybayin’s Tagalog origin.

Sanghabi, formerly known as Hibla, is a nongovernment organization that promotes indigenous Filipino culture through music and workshops. Castro was in Bicol recently to teach baybayin in Albay and Camarines Sur provinces.

“There are still living writing systems and unlike baybayin, these are still used in their respective regions,” Castro said.

He said groups that attended the International Congress on Baybayin this month agreed on the neutral term “suyat.”

“The word suyat exists or is at least close to the terms in other languages in the Philippines, including in Bicolnon, where the word used is ‘surat,’” he told the Inquirer.

Tantingco found the protection and promotion clauses of the bill to be good. “We are not opposing it in its entirety,” he said. The center, he said, would ask legislators in Pampanga province to oppose the original draft of HB 1022 and seek revisions to it.

He said Congress should not rush the implementation of a national writing systems law. “Instead, use it as a subtext first until people get used to it,” he said.

The National Commission for Culture and the Arts should move to “protect all indigenous writing systems, not just baybayin,” he said. —WITH REPORTS FROM REY ANTHONY OSTRIA AND DALE JAN DINO