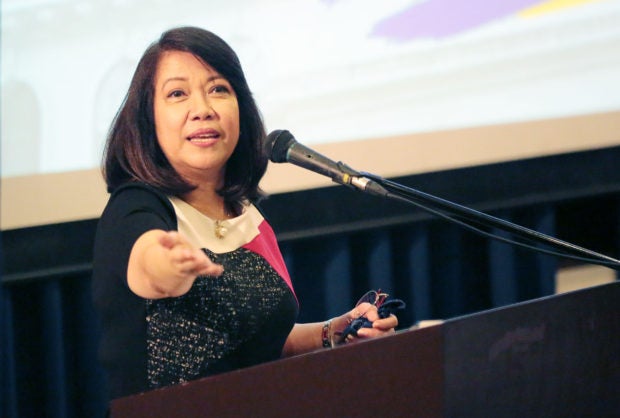 Speaking at a forum organized by law students, Sereno said the quo warranto petition brought against her by Solicitor General Jose Calida was a “sword of Damocles that hangs over the heads of all government employees.”

“Our democratic way of life and our constitutional form of government are in danger,” Sereno told the students during the event held in the auditorium of Ateneo de Manila University’s law school in Makati City.

“We will wither into a one-man rule. That’s the reality,” she added.

“Do you want a future where millions of government [employees] are [worried] about their security of tenure? If you don’t want that, then … protest. Tell them that’s wrong, that we are facing a bleak future,” she said.

Sereno, who is also fighting moves in the House of Representatives to impeach her, said Calida’s legal action aimed at kicking her out of the judiciary was “effectively a dictatorship.”

“The future of so many, the rights of so many, are being held in the hands of the solicitor general and his boss,” she said.

President Rodrigo Duterte has publicly directed Speaker Pantaleon Alvarez and their allies in the House to expedite Sereno’s impeachment.

He issued the order in response to Sereno’s insinuation that he had a hand in Calida’s decision to circumvent the impeachment proceedings and directly question Sereno’s appointment as Chief Justice in the Supreme Court.

But Sereno is unfazed, going around the country to speak at  events hosted by her supporters and law schools.

On Wednesday, for the nth time, she dared her critics to bring the impeachment case against her to the Senate.

“Let me fall at the mercy of God and the people. I am ready,” she said. “I am not afraid of accountability.”