Fox’s counsel: We are ready to bring case to CA, SC | Inquirer News

Fox’s counsel: We are ready to bring case to CA, SC 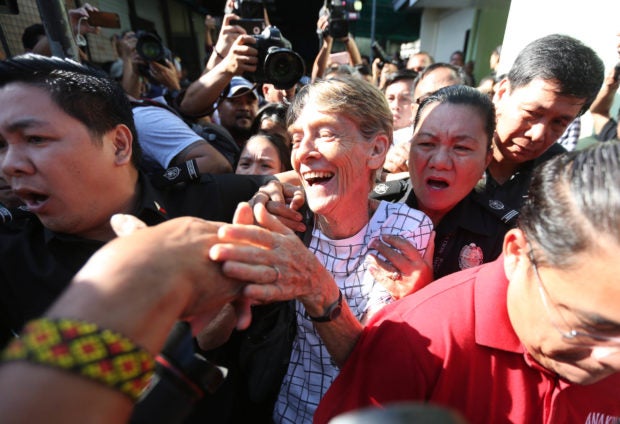 Australian nun Patricia Fox during her release from detention at the Bureau of Immigration. (Photo by MARIANNE BERMUDEZ / Philippine Daily Inquirer)

The camp of Sister Patricia Fox would question the move of the Bureau of Immigration (BI) forfeiting the missionary visa of the Australian nun.

Lawyer Jobert Pahilga, counsel for the 71-year old nun, said on Wednesday that they will first file a motion for reconsideration before the BI to dispute the visa cancellation over Fox’s alleged involvement in partisan politics.

They would then elevate the case to the Court of Appeals (CA), and further to the Supreme Court (SC), if needed, should the BI deny their motion.

“We will question the order, we will move for the reconsideration of the order of the BI, and we will ask the BI to conduct a full-blown hearing on the case of Sister Fox. That is our course of action right now,” Pahilga said in an interview on ANC.

“If that would be denied, then we will go definitely to the SC to question the order because we have still the right to file.”

“We can go to the CA or the SC to question because where there is abuse of discretion apparently on the part of the Immigration because they themselves did not follow the earlier April 17 order of the BI commissioner Morente giving Sister Patricia Fox ten days to file her counter affidavit,” Pahilga also explained.

Pahilga noted there should have been a hearing before the BI decided to forfeit Fox’s missionary visa, stressing that his client has the right to due process of law even if she was a foreigner.

“We were surprised to have received the news that there was already an order by the Bureau of Immigration to forfeit her missionary visa,” Pahilga said.

“What we expected was that we will be allowed to submit a counter-affidavit and there will be a hearing because Sister Fox has the right to due process of law, she has the right to refute the allegations of the bureau’s Intelligence Divisions,” he added.

The lawyer said that they have yet to receive the BI’s order for Fox to leave the Philippines in 30 days. According to the BI, the Australian missionary has to leave the country within 30 days from the receipt of the order.

Fox, however, was not yet for deportation.

BI spokeswoman Antonette Mangrobang explained that a deportation case against the Australian nun was still pending since she has yet to submit her counter-affidavit on the case.   /kga