BORACAY SWIM AREA Water near the iconic Willy’s Rock on Boracay Island has turned green due to algal bloom. Starting April 26, when the island is shut to tourists for six months, residents will be allowed to swim only in this area. —NESTOR P. BURGOS JR.

President Rodrigo Duterte may issue a single executive order (EO) declaring Boracay Island closed to tourists and placing it under a state of calamity.

But with three days before the island is closed, government agencies are still clueless as to when the EO—the legal basis for shutting down an island with 46,829 residents and a P56-billion tourism industry — will be issued.

Interior Assistant Secretary Epimaco Densing III said the National Disaster Risk Reduction and Management Council was scheduled to meet on Monday to formally endorse a declaration placing the villages of Yapak, Balabag and Manoc-Manoc under a state of calamity.

The EO would also mandate the closure of the island to tourists and the creation of an interagency task force for the rehabilitation of Boracay.

Other government officials also announced last week that the President was expected to issue an EO closing the island and a declaration placing the island under a state of calamity.

Densing said the order could come out on Tuesday.

Starting midnight of April 26, Boracay-bound residents and workers will pass through a two-lane verification center before they are allowed to purchase passenger boat tickets.

The left lane is for workers who will be required to present government-issued identification cards indicating their address in Boracay or a terminal pass issued by port authorities upon the request of employers.

Residents will pass through the right lane and will be required to present barangay IDs or government-issued IDs.

The mandatory demolition of illegal structures and the expansion of the 6.2-kilometer main road will start when the island is closed down, said engineer Fritz Ruiz, planning chief of the Department of Public Works and Highways in Aklan.

The Department of Social Welfare and Development (DSWD) on Monday said it would provide transportation assistance to migrant workers who would be affected by the closure of Boracay on Thursday. 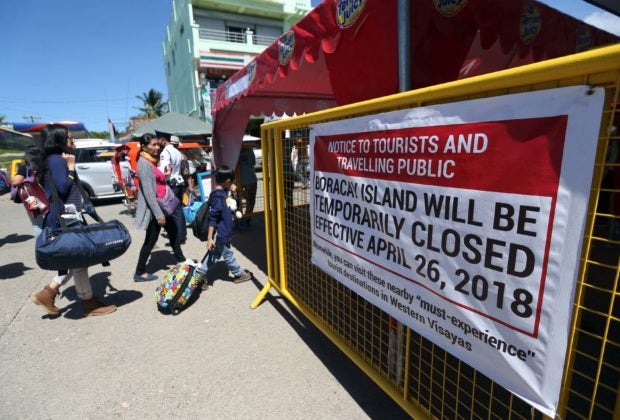 Boracay will be a ghost town starting on Thursday.

Through its operations center at Station 2 on the island, the DSWD has started the release of financial aid to workers and residents who have decided to leave on or before April 26.

Joey Urquiola, DSWD Region 6 operations center head, said teams had been deployed to document the status of the affected workers and residents.

Rebecca Geamala, DSWD regional director, said the department had earmarked P1 million as standby fund for Boracay operations and was processing the release of another P5 million.

She said these were sourced from their field office’s Assistance to Individuals in Crisis Situation fund.