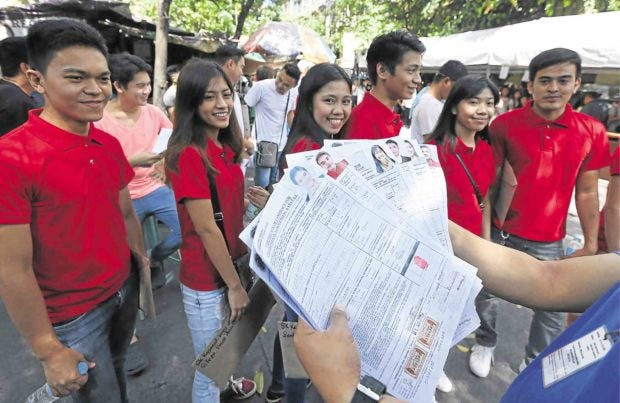 Issues of corruption in local politics and the restrictions on political dynasties have discouraged the youth from running in the Sangguniang Kabataan (SK) elections in May, youth and election officials said.

In Central Luzon, few youth leaders have signed up as candidates for SK chair also due to provisions in the law raising the age requirement to 18, according to a Commission on Elections (Comelec) official in the regions.

“Because of past experiences where older politicians manipulated and controlled the youth, they have developed a sense of distrust toward the government,” said Dela Cruz, who worked with SK Federation presidents in Cebu City from 2008 to 2014.

“They would rather organize their own groups and seek private funding to implement their activities. Others prefer to volunteer because there is no politics involved,” he added.

The lukewarm response of the youth in the SK election in May is evident in the low turnout of candidates.

A total of 8,421 SK seats are needed to be filled in 1,203 barangays in Cebu province, including the highly urbanized cities of Cebu, Lapu-Lapu and Mandaue.

A former SK chair who served in a village in Lapu-Lapu City from 2002 to 2007 believed that the new antipolitical dynasty provision in the reformed SK law “had a lot to do with the low SK … turnout.”

“It’s disheartening, but the reality is SK has always been connected to political dynasty,” said the former SK chair who wanted to be identified only as Mario.

He lamented that barangay officials would appoint SK chairs, usually their relatives, even before the COCs were filed.

“Some incumbent barangay officials lacked the drive to push for the formation of a complete set of SK chair and councilors because they were not their sons, grandchildren or nephews who would eventually be elected after the preselection process,” he said.

The need to get financial and political backing of traditional politicians is also discouraging the youth to run in the SK polls, said Marcley Augustus Natu-el, who recently graduated valedictorian of the University of San Carlos College of Law.

“Without the backing and support of the political families due to [the] antipolitical dynasty feature of the SK Reform Act, [the youth] simply does not have the confidence to run an election campaign like the way they used to due to financial concerns,” Natu-el said.

In Central Luzon, only 6,986 of them had filed COCs for SK chair in the region’s 3,102 villages as of April 21, based on Comelec reports obtained by the Inquirer.

“The drop in the number of candidates might be because of the antidynasty provision and age qualification, which is at least 18 years old but not more than 24 years old on the day of election,” said Comelec Central Luzon Director Temie Lambino.

Under the SK Reform Act of 2015 (Republic Act No. 10742), the SK chair and seven members of the SK council “must not be related within the second civil degree of consanguinity or affinity to any incumbent elected national official or to any incumbent elected regional, provincial, city, municipal or barangay official in the locality where aspirant seeks to be elected.”

According to the Comelec, 3,201 youths had filed candidacies for SK chair while 13,888 applied for SK kagawad posts in 44 towns and four cities in Pangasinan.

In Baguio City, 40 villages initially had no SK candidates. But the registration extension given by the Comelec on Saturday reduced that number to eight out of 128 villages. —Reports from Cris Evert Lato-Ruffolo, Tonette Orejas, Gabriel Cardinoza, Karlston Lapnited and Villamor Visaya Jr.