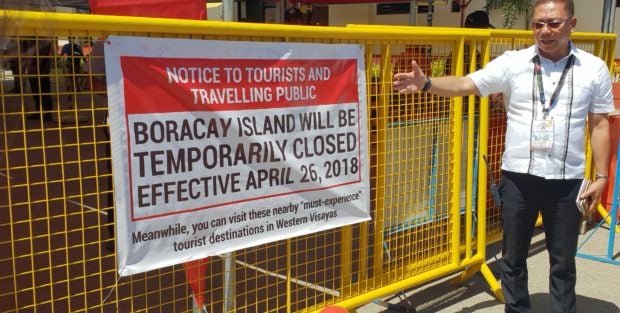 BORACAY ISLAND, Aklan – President Duterte may issue a single order declaring Boracay Island closed to tourists and placing it under a state of calamity.

But with three days before the island is closed down, government agencies are still clueless when the order, the legal basis for shutting down an island with 46,829 residents and a P56-billion tourism industry, will be issued.

Interior Undersecretary Epimaco Densing III said the National Disaster Risk Reduction Management Council was set to meet on Monday to formally endorse a declaration placing the villages of Yapak, Balabag and Manoc-Manoc under a state of calamity.

The executive order would also mandate the closure of the island to tourists and the creation of a creation of interagency task force for the rehabilitation of Boracay.

Officials earlier announced that the President was expected to issue an executive order closing the island and a declaration placing the island under a state of calamity last week.

Densing said the order “could” come out on Tuesday.

The local government of Malay which has the mandate to place any of its 17 barangays under or the entire town under a state of calamity has not issued any calamity declaration.

“There is no basis and the agencies should first explain to us that the calamity declaration is warranted,” said Malay councilor Frolibar Bautista.

Even without a written order, various agencies are proceeding with preparations for the closure of the island.