Iran threatens to ‘vigorously’ resume enrichment if US quits deal 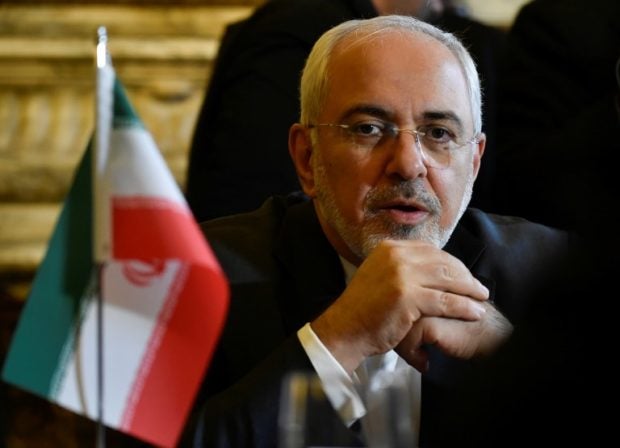 NEW YORK, United States — Iran warned Saturday it is ready to “vigorously” resume nuclear enrichment if the United States ditches the 2015 nuclear deal, and said further “drastic measures” are being considered in response to a US exit.

Iranian Foreign Minister Mohammad Javad Zarif told reporters in New York that Iran is not seeking to acquire a nuclear bomb, but that its “probable” response to a US withdrawal would be to restart production of enriched uranium — a key bomb-making ingredient.

“America never should have feared Iran producing a nuclear bomb, but we will pursue vigorously our nuclear enrichment,” added Zarif, who is in the United States to attend a UN meeting on sustaining peace.

US President Donald Trump has set a May 12 deadline for the Europeans to “fix” the 2015 agreement that provides for curbs to Iran’s nuclear program in exchange for relief from financial sanctions.

Zarif’s comments marked a further hardening of rhetoric following a warning earlier this month from Iranian President Hassan Rouhani that Washington would “regret” withdrawing from the nuclear deal, and that Iran would respond within a week if it did.

The fate of the Iran deal will be a key issue during French President Emmanuel Macron’s state visit to Washington beginning Monday, followed by talks with German Chancellor Angela Merkel in Washington on Friday.

Zarif said the European leaders must press Trump to stick to the deal if the United States “intends to maintain any credibility in the international community” and to abide by it, “rather than demand more.”

The foreign minister also warned against offering any concessions to Trump.

“To try to appease the president, I think, would be an exercise in futility,” he said.

European leaders are hoping to persuade Trump to save the deal if they, in turn, agree to press Iran to enter into agreement on missile tests and moderating its regional influence in Yemen, Syria and Lebanon.

If the United States buries the deal, Iran is unlikely to stick to the agreement alongside the other signatories – Britain, China, France, Germany and Russia, said the foreign minister.

“That’s highly unlikely,” he said. “It is important for Iran to receive the benefits of the agreement and there is no way that Iran would do a one-sided implementation of the agreement.”

European diplomats have argued that the deal could be salvaged without the United States, with a view to bringing Washington back in the fold at a later time, possibly under a new administration.

“The United States under the Trump administration has done everything it could to prevent Iran from benefiting from this agreement,” Zarif charged.

The foreign minister warned of “drastic measures” under discussion in Iran.

Zarif declined to specify, pointing to “what certain members of our parliament are saying about Iran’s options.”

Despite the threats of a tough response to a US pullout, Zarif also left open the possibility of diplomatic action during a 45-day period to formally notify the withdrawal.

“Whether other things can be done during those 45 days … is a hypothetical question that needs to be addressed at that time,” said Zarif.

A decision by Trump to walk away, he warned, would send a message to all governments “that you should never come to an agreement with the United States, because at the end of the day, the operating principle for the United States is, what’s mine is mine, what’s yours is negotiable.” /cbb