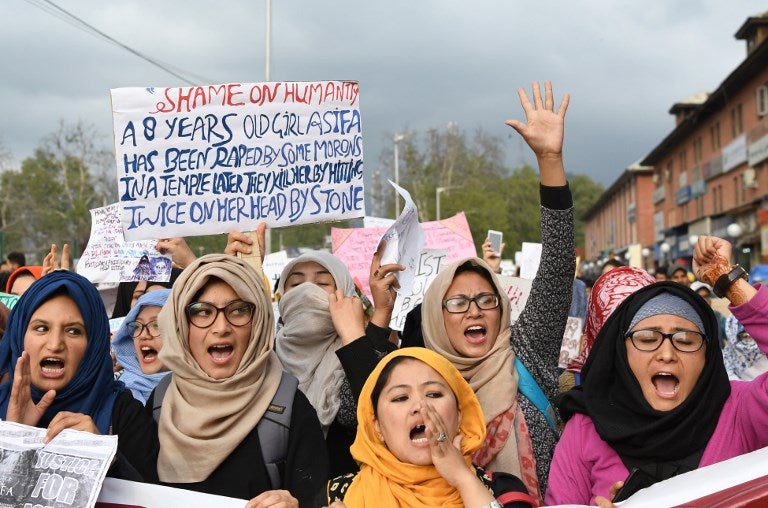 In this file photo taken on April 16, 2018, students of the All Ladakh Association of Kashmir hold placards and shout slogans in Srinagar during a protest calling for justice following the recent rape and murder case of an eight-year-old girl in the Indian state of Jammu and Kashmir. / AFP PHOTO / TAUSEEF MUSTAFA

The internet is being cut for hours on end in Jammu as authorities try to halt protests that have grown in the Kashmir winter capital since the rape-murder of an eight year old girl opened a new front in India’s Hindu-Muslim divide.

With near daily protests held across the country over the brutal killing, Jammu police say the digital clampdown is to halt the spread of “rumors” that inflame tensions.

Much damage has already been done in the city. Eight Hindu men are on trial for the rape and murder of the Muslim girl, or for trying to destroy evidence.

On the streets, Muslims are demanding justice while Hindu radicals say the inquiry is biased. Threats have been made and state politicians forced to resign.

“Hang the real guilty,” read banners carried by about 100 mainly Hindu protesters on a Jammu road on Friday. The group were demanding a new investigation into the events in Kathua district about 60 kilometers from Jammu.

According to police the girl was drugged, held captive in a Hindu temple for five days, repeatedly raped and then killed.

They say the killing in January was part of a plot to drive the girl’s Muslim nomad community, the Bakarwal, out of the region.

Activists for the girl “have made a big fuss so that innocent men are put behind bars,” said Rajimder Abrol, a lawyer who took part in the Jammu protest by Hindus.

In an illustration of the communal distrust that permeates the region, Deepak Kamora, an insurance company employee who was among the protesters, accused Muslims of taking part in drug dealing and “terrorist” activities.

Hindu radicals see the murder charges as part of a conspiracy against them. Muslim activists say the murder is new proof of their persecution in the Hindu-majority region.

While Jammu and Kashmir as a whole is Muslim majority, the Jammu region in the south is Hindu-dominated.

“They call Jammu the ‘City of Temples’ but they are changing it, they are replacing temples with mosques,” said Kamora.

Before the eight were charged, a group of Hindu lawyers tried to stop police entering a court in Kathua to register charges in the rape case.

Kirty Bhushan Mahajan, head of the lawyers group in the district, told AFP the events had been twisted.

The controversy over the protest was “a conspiracy aimed at upsetting community harmony in the region”.

“We do not support the rapists. We do not know who the guilty people are,” he added, criticizing the police investigation.

The Jammu powder keg is so primed however that India’s Supreme Court ordered police protection for the family of the girl, who have taken their cattle into the Kashmir hills.

Their lawyer says he has received death threats and their house is also under armed guard.

Talib Hussain, a lawyer and activist for the Muslim nomads who has led protests to demand faster action in the rape case, said Hindu-Muslim relations are at their lowest point since the deadly 1948 partition of India.

Two BJP ministers in the Kashmir state government resigned after they took part in protests in support of the accused rapists.

Muslims in Jammu say they have no reason to trust the national government.

“The Hindu fundamentalists are putting people against Muslims,” said Hussain.