No Duterte EO vs contractualization 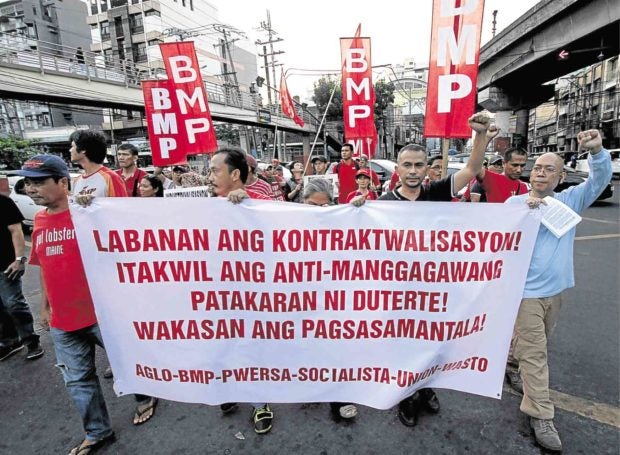 UNHEEDED PLEA Members of the militant Bukluran ng Manggagawang Pilipino march on Mendiola in March to call for an end to contractualization, an appeal that workers said went unheeded after President Duterte did not sign an executive order to grant their demand. —RICHARD A. REYES

It’s only right that the government acted against the practice of labor-only contracting, it is already too late to appease workers dismayed by President Rodrigo Duterte’s decision not to sign an executive order against contractualization.

Alan Tanjusay, spokesperson of the Associated Labor Unions-Trade Union Congress of the Philippines, noted that while the plan to crack down on labor-only contracting was good, it was case of being too little and too late.

“The plan to conduct an Oplan ‘Tokhang’ against abusive, recalcitrant employers and business owners is good. But it’s too late to appease the workers and labor groups who are deeply dismayed,” Tanjusay said on his Facebook account.

He said workers were extremely disappointed by the President’s refusal to sign an executive order that would have stopped the practice of “endo,” or labor-only contracting.

Instead of signing the EO, the President ordered the Department of Labor and Employment to go after the so-called “cabo,” or companies engaged in labor-only contracting.

Labor Secretary Silvestre Bello III was told to submit a comprehensive report on Deparment Order Nos. 174 and 183 on contractualization, and a list of companies engaged in labor-only contracting.

“[But] if you really wanted a crackdown on violators of security of tenure laws, why do it only now and not upon assumption to office?” said Julius Cainglet, Federation of Free Workers (FFW) vice president.

The crackdown on violators of labor law provisions on security of tenure should have been done shortly after the President began his term.

Besides, the controversial Oplan Tokhang, a brainchild of the Philippine National Police, was already tainted by the thousands of lives lost in the government’s drug war.

FFW urged the government to simply “implement the end of contract for contractualization,” instead of resorting to showy tactics and excuses.

“The show is over. We don’t need big words and excuses. Manpower agencies and manpower cooperatives should go. Middlemen and big business have profited too much from poor workers. Direct hiring should once again be the norm,” Cainglet added.