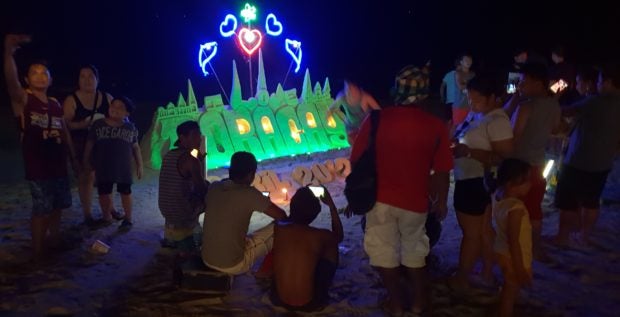 Boracay tourists are drawn to a lighted sandcastle days before the island is closed down to tourists (By Nestor P. Burgos Jr./INQUIRER VISAYAS)

BORACAY ISLAND, AKLAN—While tourists were swimming and sunbathing at the white beach a few meters away, resort owner Christopher Jude Lee talked with his employees in a special meeting at the lobby of the Hey Jude South Beach resort here.

The mood was sober and the employees listened intently and silently as Lee discussed plans when the resort island is shut down to tourists on April 26.

Lee said he has to close down the two resorts he operate on the island and will maintain a skeletal force from the total of 58 employees.

They will maintain the operations of the resort restaurant for Boracay residents at a discounted price.

While the island is closed to tourists, his employees will get P2,000 per month while those that will be asked to stay will be working 10 days per month with two free meals per day.

His employees can also stay in the resort for free so they can save on boarding house expenses. The management will also continue paying contributions for the Social Security System, PhilHealth and PagIbig funds.

The employees will be receiving not even half of what they get during regular operations but Lee said they have to cut down on expenses during the closure.

“We will give them as much support as we can,” he told the INQUIRER.

Lee said everyone is resigned to the closing of the island.

“We are trying to make the most of it,” he said.

But he said the lack of a comprehensive plan of government agencies and the tentativeness of the length of the closure is also making it difficult for business operators to make their own plans.

“I really have not even computed how much exactly will be our losses but our bookings started to go down already in March (after it was announced that the island will be closed down for the removal of illegal structures and rehabilitation.)

But Lee said his situation is better compared to other business operators and property owners.

“I am really getting a big hit but a lot of people are losing everything,” he said.

He cited some of his neighbors along Bulabog beach at the eastern side of the island who will be affected by the enforcement of the 30-meter beach easement.

“They were given permits when they put up their houses and hotels and now they are told they have to demolished part or the whole of the buildings. A friend invested his life savings to buy a condominium unit as his retirement home but the building is at risk of being demolished,” Lee said.

Similar meetings of management and employees are happening all over the island with some resorts closing on April 24 or two days before the mandated shut down.

Business operators are striving to provide assistance to their workers amid the absence of a comprehensive economic assistance and compensation from the government.

The Department of Labor and Employment in Western Visayas said it would  provide emergency employment to 5,000 workers in the informal sector including drivers, passenger motorboat crew, vendors, masseurs, pedicurists and manicurists. They will be employed in the cleanup activities on the island.

The agency is still profiling an estimated 30,000 registered and unregistered workers on the island.

While workers of resorts and hotels especially those employed by big companies will receive financial assistance, many other workers in the informal sector have to leave the island.

Marilou Fajardo, 54, a manicurist who also braid hair, is going home to South Cotabato on April 24.

She earns from P1,000 to P3,000 daily which mainly supports the schooling of a 19-year-old daughter.

Fajardo came to Boracay in December 2017 upon invitation of a town mate who works in a resort.

She said she was attracted by the higher income because she earns P500 at most back home.

“It’s hard for me because my daughter is going to enroll soon. I just hope Boracay will open soon and I can come back,” she said.