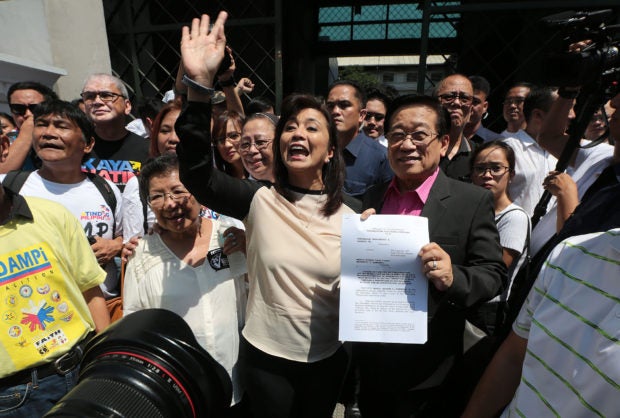 “This fight is not only about our fight with Marcos. This fight is to give essence to the desire we conveyed in the last election. Our wish is to have all the votes counted rightly—and that is what we are fighting for today,” she said in Filipino.

Robredo, who defeated Marcos in the 2016 polls by a margin of 260,000 votes, asked the Presidential Electoral Tribunal (PET) to reconsider its decision stating that the small circle next to the candidates on the ballot must be shaded at least 50 percent to be considered a valid vote in the recount.

A recount of the votes has begun in the three pilot provinces chosen by Marcos in his protest — Robredo’s home province of Camarines Sur, Iloilo and Negros Oriental.

“What we are asking is simply that the basis for the counting of votes in the past election be the same basis that we use now,” Robredo said, addressing followers as she filed the motion with her lawyers, led by Romulo Macalintal.

Macalintal noted that the Commission on Elections had sent to the PET in 2016 a resolution mandating that the 25-percent threshold was a “legal and lawful basis” to determine whether a vote should be treated as valid. — DJ YAP