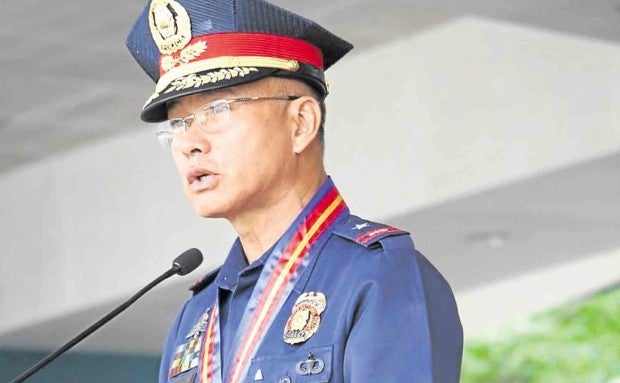 Albayalde said that he would continue retired Dir. Gen. Ronald Dela Rosa’s programs, and nationalize whatever he has started at the National Capital Region Police Office (NCRPO) where he was the regional director.

(I will continue everything what we have started at the NCRPO. I will do everything that I can to improve and strengthen our country’s peace.)

Albayalde said that as chief, he would also focus on “imposing strict discipline, reform, and internal cleansing” to weed out police scalawags, reminding policemen to respect themselves to provide genuine service to the public.

“We will show respect, both to ourselves and to the public. Genuine public service is anchored on respect. Self-respect is what guides our morals. We wear our uniforms properly and with pride,” he said.

Despite being tough, Albayalde said he would be fair and “lead by example.”

The new police chief, known for his surprise visits at police stations to check on his men, said he expects provincial and city directors to conduct similar inspections to “regularly assess the readiness” of forces on the ground.

Albayalde, who was a member of the Special Action Force (SAF), also said he would standardize the elite unit’s training and make it a requirement for new recruits before being deployed to the regions.

He likewise vowed to build better facilities, bigger detention cells in police stations, most of which are congested with prisoners. /je