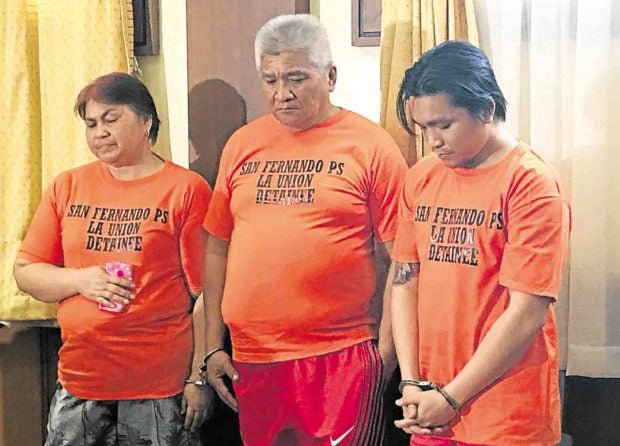 LINGAYEN, Pangasinan — Police said they were retracing the places in the Ilocos region that relatives of slain Ozamiz City Mayor Reynaldo Parojinog had visited before they were arrested in La Union province on Monday.

Ozamiz Councilor Rizalina Francisco fled her city after her nephew, the mayor, was killed in a police raid in July last year.

Citing arrest warrants issued in Ozamiz, the police detained Francisco, 54, her husband, Manuelito, 57, and their son, June, 31, after their car was stopped at a checkpoint at Barangay Bangcusay in San Fernando City.

“Did they come just to see the beautiful places of Ilocos Sur and Ilocos Norte? We are trying to find out if there are illegal activities that they may have committed,” said Chief Supt. Romulo Sapitula, Ilocos police regional director.

The Franciscos had come from Vigan City in Ilocos Sur and Pagudpud town in Ilocos Norte, and were on their way back to Metro Manila in a rented Toyota Innova when they were stopped.

Sapitula said the Franciscos were facing cases for illegal possession of firearms and explosives.

He said Manuelito was a cofounder of the organized crime group, Parojinog/Kuratong Baleleng Group, which had been linked to cases of robbery, extortion and drug trafficking.

June was a former barangay captain of San Roque in Ozamiz.

He said the Franciscos knew they were being hunted by the police and so they moved from one place to another.

When they were arrested, there were six other people in the car, including four children aged 6, 8, 12 and 14.

“They did not know these people. When they rented the car, they just invited those people to join them for the trip. That was their way of removing suspicions that they were fugitives,” Guiagui said.

He also said it was possible that the Franciscos had met Parojinog’s brother, Ozamiz City Councilor Ricardo “Ardot” Parojinog, who is a fugitive and has a P5-million price for his capture. —Gabriel Cardinoza

Read Next
Malaysia’s Mahathir says opposition could win
EDITORS' PICK
Work-From-Home is here to stay and requires reliable logistics
Legarda emphasizes role of ICC/IPs in nation building this IP month
USAID Opportunity 2.0 calls for applicants for grants for out-of-school youth engagement
Pharmally scandal: When middlemen profit even during a pandemic
DOTr to defend proposal to increase passenger capacity in public transport
The crisis within: Suicides rise as COVID takes its toll on lives, livelihood
MOST READ
Bongbong says PH should modernize infrastructure to become Asia’s next logistics hub
PDP-Laban’s Cusi wing inks coalition deal with Reform Party
Isko to critics after remarks vs Robredo: I’m sorry, this isn’t about Mr. Congeniality
Pharmally scandal: When middlemen profit even during a pandemic
Don't miss out on the latest news and information.