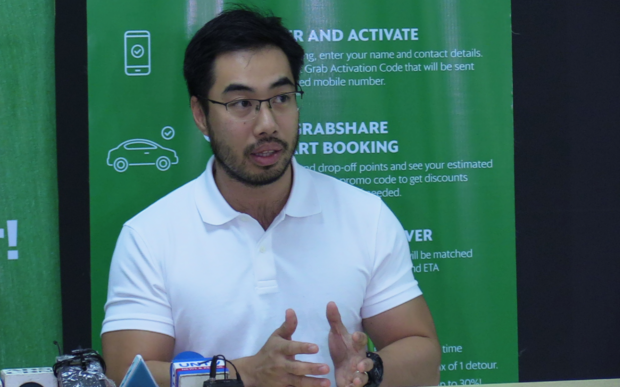 Grab Philippines did not inform its riders when it implemented its P2 per minute travel charge in July 2017, the transport network company’s (TNC) top official in the country admitted on Wednesday.

In a press briefing, Grab Country Head Brian Cu said there were no communications made through their application to inform the riders of the charge, which was a component of their fare.

“There was no comms to the riders inside the app. In the information card, we’ve updated that, but when we raised the P2 per minute, we did not include that. So ‘di namin nailagay,” Cu told reporters.

But Cu pointed out that unlike in usual taxi rides, the price for Grab rides is “not a pre-agreed per minute or per kilometer fare.”

He said what is important is that the riders were at least informed of their total fare when using the application.

“There’s nothing illegal with failing to update the information,” he said.

Grab earlier said that they “unilaterally” implemented the charge, which they said was allowed under the Land Transportation and Regulatory Board’s (LTFRB) Department Order 2015-011.

The order allowed TNCs to set its own fares but with the oversight of the LTFRB.

Grab’s legal counsel Miguel Aguila said the LTFRB was informed of this change during a technical working group meeting in late July 2017.

“Per minute charges remain part and parcel to Grab’s fare structure today and we have continuously been transparent about this truth,” Grab said in a previous statement.

This charge, he said, is on top of Grab’s P40 flagdown rate and P10 to P14 per kilometer charge.

Apart from this, he said Grab has also “committed acts of deception by putting out online collaterals claiming that unlike regular taxi services, they do no impose extra charges for travel time.”

After Tuesday’s hearing on the petition filed by Nograles before the LTFRB, Chair Martin Delgra III told reporters that in one of their technical working group meetings last year, there were “discussions” about Grab’s plan to collect a P2 per minute travel charge. Bu he said the TNC did not inform them when it was implemented.

Pressed if that meant that Grab had been illegally charging passengers, Delgra said “we have not decided on that yet.” /jpv