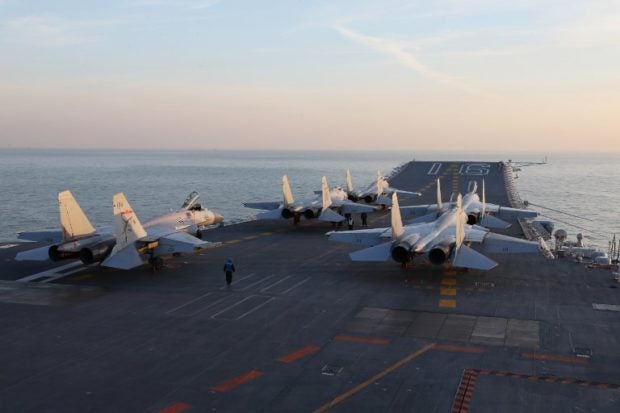 This picture taken on an undisclosed date in December 2016 shows Chinese J-15 fighter jets waiting on the deck of the Liaoning aircraft carrier during military drills in the Bohai Sea, off China’s northeast coast. China is set to hold live-fire drills in the Taiwan Strait Wednesday. AFP

BEIJING, China — China is scheduled to hold live-fire drills in the Taiwan Strait Wednesday, flexing its military muscle after warning Taipei about seeking independence or closer ties with Washington.

It is the first such exercise in the waterway since 2016, and it coincides with Taiwanese President Tsai Ing-wen’s visit to Swaziland, one of the self-ruled island’s few remaining international allies.

The Chinese government has given scant details about the maneuvers, with a Fujian province maritime safety administration statement merely saying last week that the drills would take place from 8 am until midnight.

China’s Taiwan Affairs Office director Liu Jieyi said Monday the drill was “an action to safeguard the sovereignty and territorial integrity of our motherland”.

As she left for Africa on Tuesday, Tsai said Taiwan has “the confidence and determination to safeguard the country’s security”.

Relations between Beijing and Taipei have deteriorated since Tsai came to office in May 2016, largely because she has not embraced the position that Taiwan and China are part of one country.

China sees the island as part of its territory to be brought back into the fold and has not ruled out reunification by force.

“The mainland must create military pressure to let the other side know that no matter whether it happens gradually or they really declare independence, it is totally unacceptable,” Song Zhongping, military commentator for Hong Kong-based Phoenix TV, told AFP.

After the Communist Party-led parliament paved the way for Xi Jinping to rule for life, the Chinese president warned on March 20 that “all acts and tricks to separate the country are doomed to fail”.

Song said the Liaoning is likely to participate in Wednesday’s drill, as it “has a lot of advantages for resolving the Taiwan problem.”

“It can effectively acquire control of the airspace, and even effectively block the US-Japanese alliance’s strategy for intervening in China’s plan to settle the Taiwan issue,” he said.

Swaziland is among just 20 nations that still recognize Taipei.

The drill “is part of Beijing’s psychological warfare against Taiwan, and possibly a means to divert attention from Tsai’s visit abroad by compelling media to report on the military drills,” said J. Michael Cole, a Taipei-based senior fellow at the University of Nottingham’s China Policy Institute.

The planned drill could also serve as a signal to Washington, which sent an aircraft carrier through the disputed South China Sea last week.

Washington switched diplomatic recognition from Taiwan to China in 1979 but maintains trade relations with the island and is its main arms supplier.

China said the US should stop official exchanges with Taiwan to avoid “damaging Sino-US relations”. /cbb