Group wants 5 justices who testified against Sereno to resign 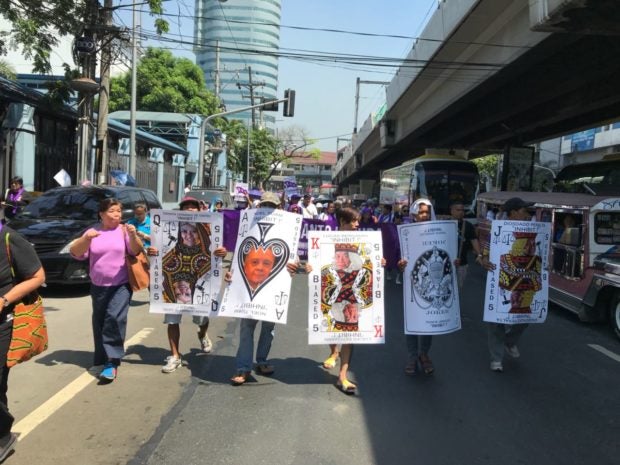 A broad multisectoral alliance on Tuesday called on five Supreme Court associate justices to resign if they would not inhibit from the deliberations on the quo warranto case against Chief Justice Maria Lourdes Sereno.

The Coalition for Justice (CFJ) held protests both in Padre Faure and in Baguio City where the High Court was holding its summer session.

Sereno, in her separate motions sought the recusal of Associate Justices Teresita de Castro, Diosdado Peralta, Lucas Bersamin, Francis Jardeleza, and Noel Tijam. All the five justices testified against Sereno during the House Committee on Justice hearing on the impeachment complaint filed by lawyer Lorenzo Gadon.

The five justices, however, refused to inhibit and participated during last week’s oral argument.

“If the Biased 5 (referring to the five justices) will not inhibit, we adamantly insist that they resign,” the group said.

They added that Sereno’s right to due process has been violated when the Supreme Court condoned the participation in the recent oral arguments of the five justices.” “Should it grant the quo warranto petition,” it continued, “that decision shall be invalid.”

The CFJ further said that the quo warranto action itself was “illegal” because constitutionally, “impeachment is the only mode for removing an impeachable officer.”

“If it favors the Solicitor General, its ruling shall not only be illegal and void, it shall also critically jeopardize judicial independence as well as its own institutional integrity,” the group declared.

The CFJ asserted its right to protest to defend judicial independence and the rule of law.

“Justice in this country is dying; it is our duty to resuscitate it. We are able. We are the people who empower the State,” the group said.

The High Court has wrapped up the oral argument on the quo warranto case and has ordered all the parties to submit their memorandum before the case is submitted for decision. /cbb