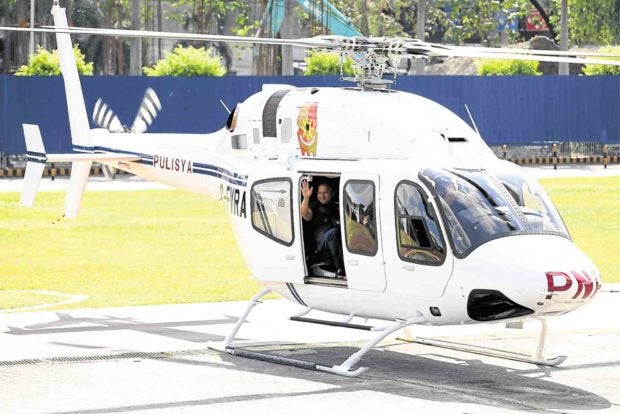 Outgoing PNP chief Ronald dela Rosa waves to photographers as he flies to Baguio City aboard the PNP’s new Bell 429 helicopter for his testimonial parade at the Philippine Military Academy. —NIÑO JESUS ORBETA

Dela Rosa thanked his men for working closely with the Duterte administration’s war on drugs and apologized to them if they thought he fell short of expectations.

“The commitment of the PNP in the illegal drugs campaign does not end with the retirement of Ronald ‘Bato’ dela Rosa. Rather, we can expect more results-oriented operations … under a new leadership that would infuse new blood into the campaign,” he said in a brief speech.

Dela Rosa was the chief implementer of the President’s crackdown on illegal drugs, which has claimed the lives of thousands of drug suspects but has failed to haul drug lords to jail.

As he wound down his 21-month tenure as PNP chief, Dela Rosa said 19,086 drug offenders had been arrested in 12,032 operations nationwide from December last year until April 13.

He said he would ask his successor, National Capital Region Police Office (NCRPO) Director Oscar Albayalde, to continue the war on drugs and the internal cleansing in the PNP.

President Rodrigo Duterte had earlier appointed Dela Rosa head of the Bureau of Corrections. The agency oversees the National Bilibid Prison, which Mr. Duterte has said is a haven of drug traders.

Dela Rosa said at a press conference on Monday that the “lowest point” of his term as PNP chief was the murder of Korean national Jee Ick-joo, who was kidnapped in October 2016 and killed right inside Camp Crame by rogue cops detailed to the PNP’s Anti-Illegal Drugs Group.

Another low point, he said, was having to attend a Senate investigation of the war on drugs and of the extrajudicial killings that critics had accused the police of committing.

He said that one was “defenseless” in front of senators.

“You cannot talk back, that’s why I had to [keep my emotions] to myself until I just cried because I felt so bad,” he said.

Dela Rosa told the police force that “it was up to them” to judge whether he was a “good or bad father of the organization.”

“Again and again I will say, I am very proud to have been your chief PNP,” he said.

Read Next
Palace: Panglao’s prospects good, unlike Boracay’s
EDITORS' PICK
Giant clams worth P160M seized in Palawan raid
Nestlé Philippines’ ‘NESCAFÉ Plan’ bags Grand Anvil at PRSP 56th Anvil Awards
Every Filipino home can now be a smart home with realme TechLife
So: I lacked connections to succeed in PH ‘culture’
New variants suspected in surge of Covid-19 cases
Smart reinforces superiority with best speed and mobile video experience in PH
MOST READ
How to lose a Filipino genius: Wesley So officially a US citizen
US lays out list of aid to ‘satisfy’ Duterte following VFA payment demand
So: I lacked connections to succeed in PH ‘culture’
Jesuit lawyer, constitutionalist Fr. Joaquin Bernas dies at 88
Don't miss out on the latest news and information.