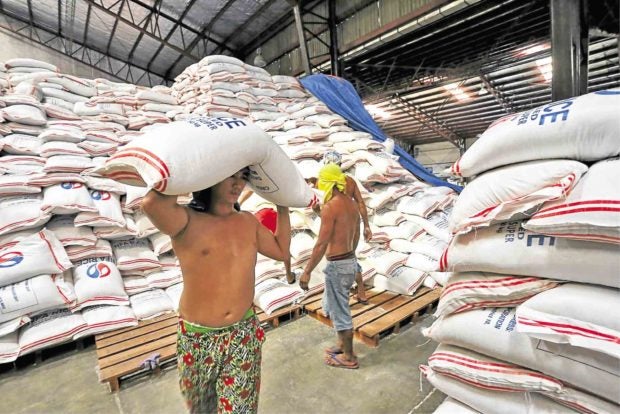 In this photo taken in March, workers release sacks of rice from a National Food Authority (NFA) warehouse in Cebu City. Recently, in Tacloban City, the NFA condemned a shipment of rice seized by the Bureau of Customs in 2014. —JUNJIE MENDOZA / CEBU DAILY NEWS

TACLOBAN CITY — While the country is gripped with the lack of cheaper rice from the National Food Authority (NFA), at least 900 sacks have been found rotting inside its warehouse in Tacloban City after these were seized in 2014.

Jose Naig, Bureau of Customs (BOC) acting district collector for Tacloban port, said the NFA had certified that the rice shipment was no longer fit for consumption and the bureau would just throw it away.

Naig said he felt bad that these sacks of rice had to be disposed of at a time when there was a shortage of NFA rice in the country.

“But we have to dispose of these sacks of rice because these pose a danger to public health if these would be sold in the market,” he added.

Rice distributed by the NFA is cheaper than commercial rice varieties available in public markets and other grain outlets. The NFA buys its stock from local farmers or resorts to importation.

Reports said the government had approved rice importation to replenish the NFA’s stock, with the initial shipments arriving in May or June.

Naig, who took over only in January, said what the BOC found in Tacloban were 900 sacks of commercial varieties seized in 2014 due to lack of importation permit by the consignee whom he did not identify.

He said the shipment was stored in the NFA warehouse after no one came to bid in the auction called by the BOC.

These were kept in the NFA warehouse for four years until these could no longer be used since the quality of grains had deteriorated.

Naig said the BOC received a certification from the NFA last month that this particular shipment of rice was no longer fit for human consumption or as animal feed.

“We are asking assistance from the Office of the City Mayor if we can dump these condemned sacks of rice in their landfill. We need to make sure to bury these items so scavengers will not touch them,” he said.

The mayor’s office has yet to respond to the BOC’s request, Naig said.