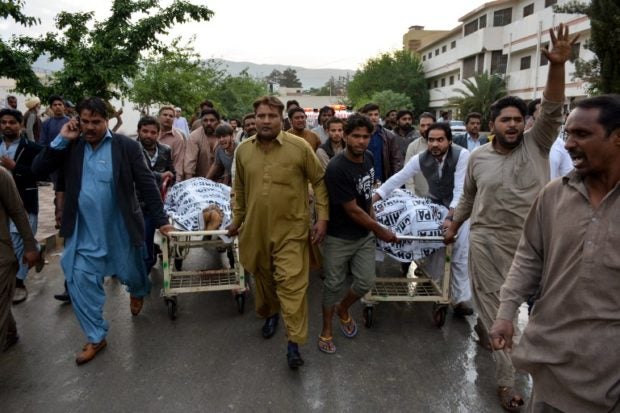 Pakistani Christians mourners push stretchers carrying the dead bodies of relatives who were killed in a drive-by shooting outside a church, at a hospital in Quetta on April 15, 2018. Two Christians were killed in the shooting outside a church in southwestern Pakistan on April 15, 2018, officials said, the second such attack on the minority community in the area this month. AFP

QUETTA, Pakistan — Two Christians were killed in a drive-by shooting outside a church in southwestern Pakistan Sunday, officials said, the second such attack on the minority community in the area this month.

It came just weeks after four Christians were shot dead in the city, an attack also claimed by ISIS.

Sunday’s shooting took place in the Christian-majority Esa Nagri neighborhood of Quetta, where hundreds gathered to protest the killings.

“Around 500” protesters blocked a road by placing the bodies of the two victims in the middle, said local official Javed Anwar Shawani.

“We are negotiating with them to make them disperse and bury” the victims, he added.

Islamist militants have in the past attacked Christians and other religious minorities in Balochistan.

In December last year, two suicide bombers blew themselves up at a Quetta church, which was packed with worshippers, killing nine people and wounding over a dozen.

Christians make up less than two percent of Muslim-majority Pakistan’s 200 million people, and have long faced discrimination and violence. /cbb