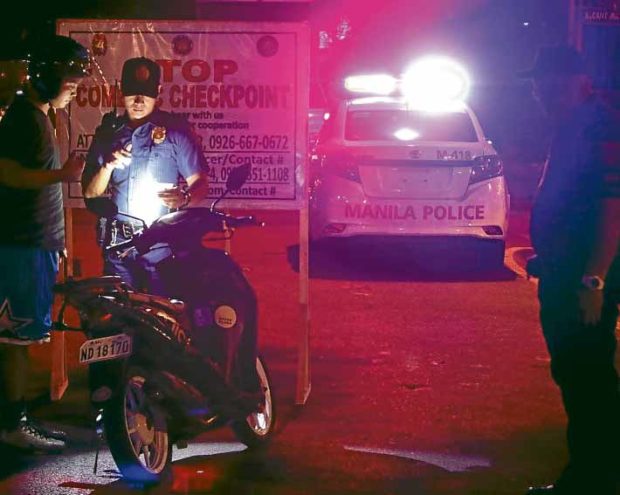 CHECKPOINT Police officers man a Comelec checkpoint along Lacson Avenue in Manila following the start of the barangay and Sangguniang Kabataan election period on Saturday. —RICHARD A. REYES

Candidates in the barangay and Sangguniang Kabataan (SK) polls need not attach their biodata or resumés and campaign platform to their certificates of candidacy (COCs), according to the Commission on Elections (Comelec).

“It actually has no bearing in the filing of COCs. The election officer will accept the COC forms, with or without biodata and program of government,” the Comelec said on its Twitter account in response to several queries on the matter.

An official of the Department of the Interior and Local Government (DILG) earlier urged the Comelec to require barangay and SK candidates to submit their resumés and campaign platforms.

Although the Comelec had no more time to deliberate on and enact a policy on the matter, the poll body said there was no harm in complying with the DILG suggestion.

“This will help you in informing and educating voters in voting wisely come campaign period,” the commission said.

A total of 17,481 people filed COCs for barangay and SK positions on the first day of candidacy registration on Saturday, preliminary data released by the Comelec showed.

Of the total COCs filed as of Saturday, Jimenez said 13,982 were for the barangay polls, including 1,986 running for chair and 11,996 running for kagawad.

There were 3,499 COCs filed for the SK elections, including 845 running for chair and 2,654 running for kagawad.

The filing period for COCs will end on April 20.

Applicants are required to personally file their COCs in three legible copies, sworn before a notary public or any official authorized to administer an oath, with a passport size photo attached to each copy and a documentary stamp affixed.

COCs must be filed between 8 a.m. and 5 p.m. in the Office of the Election Officer that has jurisdiction over the barangay, where the aspirants are seeking office.

Election Commissioner Rowena Guanzon reminded registrants to make sure they did not have connections with any political party.

“Be aware: Candidates for barangay positions will sign a COC that states they are not members of any political party, group or coalition of parties,” Guanzon said on her Twitter account.

Under Section 38 of the Omnibus Election Code, barangay elections are nonpartisan and candidates may not represent themselves as belonging to any political party, or seek nomination or material support from one.