Where PWD means ‘people with dreams’

Envisioned to rise in Cainta, Access Ville allows persons with disabilities to dream about owning their own home and claim the dignity often denied them
By: Jodee A. Agoncillo - Reporter / @jagoncilloINQ
Philippine Daily Inquirer / 07:00 AM April 15, 2018 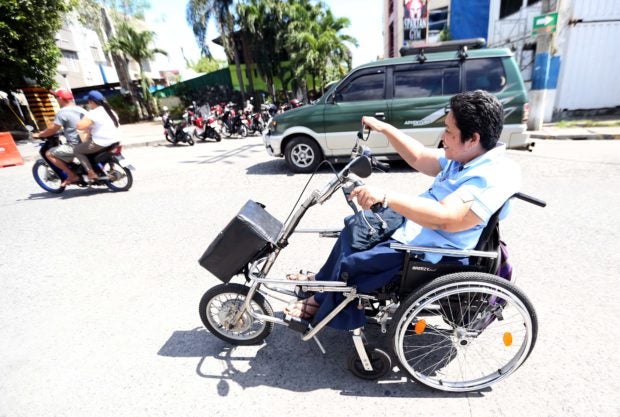 GOING PLACES Virginia Montilla of the Persons with Disability AffairsOffice (PDAO) rides to work on her customized and battery-powered wheelchair. The PDAO has partnered with the Cainta local government to come up with a housing project for the disabled at BrooksideHills. —LYN RILLON

Marilou Deniega, 53,  meticulously sifts through the application papers before her with an energy that belies her condition.  The wheelchair-bound visual artist was diagnosed with cerebral palsy when she was 3 months old.

Her ailment does not allow her to move her head, so husband Allan, whom she met at Tahanang Walang Hagdanan, is a constant companion, pushing her wheelchair and walking her to work.

The documents remind Deniega of her own dream to own a home.  They are application papers from fellow persons with disabilities (PWDs) for a slot in a housing project in Cainta, Rizal, which was initiated by disabled people with help from the local government.

“This is going to be an inclusive, decent and accessible community for the deaf, blind and those with all kinds of disability at Brookside Hills in Cainta, Rizal,” said Montilla, herself a PWD who was diagnosed with Pott’s disease, or tuberculosis of the bones.

The planned housing project, started by Lolita Gelle, executive director of Foundation for These-Abled Person, Inc., would give some 170 PWDs their own lots, and hopefully houses, once the Cainta Urban Poor Affairs Office (Upao) and the PDAO are able to find viable partners who can work out an affordable payment scheme, says Montilla.

Each beneficiary will be given two units at most, measuring around 29 square meters each in the 9,000-square-meter property. The plan is a single detached unit since most PWDs have a phobia for floods.

Deniega, who volunteers as secretary for the housing project, said the project was inspired by Gelle who had managed a housing project for PWDs in Tacloban, Leyte, which was affected by Super Typhoon “Yolanda” (international name: Haiyan) in 2013.

Before finding the Brookside property in September last year, Deniega recalls being looked down upon by a lot owner. “Do you have the capacity to pay me?” the owner had asked archly, arms akimbo.

She did not consider that lot. “Would I allow her to insult me again?” she explains.

“To have a home is our dream,” says Deniega, a member of Circle of Friends Foundation Inc., together with her husband, Allan, who grew up living and studying at Philippine Orthopedic Center and Tahanang Walang Hagdanan, a shelter for disabled people.

“My dream is a simple home, which has railings all over and an accessible comfort room,” she says, adding that finding such toilets is difficult among PWDs.  Hopefully, the government would also set aside a special lane for PWDs so they don’t have to risk life and limb using the main roads, she adds.

The cost may be a problem though, says Deniega. Most PWDs are minimum wage earners, some employed at City Hall.  “But they are resourceful,” she says, adding: “If you want to help them, show them they can do it.  They don’t need dole-outs.  Nor should they be treated like babies.”

Which is why housing applicants are carefully assessed on their capacity to pay.  “How can you appreciate something if you didn’t work for it?” Deniega asks.

So far, says Sta. Maria, the Upao and Cainta Mayor Kit Nieto have worked out a payment scheme with the landowner to bring down the interest on the mortgage payment and shorten the period of repayment.

“We don’t want to see PWDs grow old and die before they can even pay the lot in full and own it,” says Sta. Maria.

Under the scheme that the mayor and Upao have worked out, the PWDs are expected to make a down payment of P4,400, and later pay P2,862.10 every 5th of the month for four years.

Mayor Nieto is currently looking for potential partners who can help the PWD beneficiaries build the housing units, according to his office.

As of last week, the Upao has reached out to various groups like Gawad Kalinga (GK), Habitat for Humanity and the offices of Sen. Manny Pacquiao and Vice President Leni Robredo.

Helping the Upao in the search is Bayani, 59, a mechanical engineer by training and a sales manager for a pharmaceutical firm, whose limbs had to be amputated in 2012 because of diabetes.

“You should always be positive,” he says. “The doctor told me my legs had to be cut or I’d die. When I woke up in the ICU (intensive care unit), I thought God wanted me to do something. I realized I should help. I remember then the PWDs passing by our house frequently.”

Bayani hopes to apply his skills as a salesman to help set up deals with potential partners like GK and Habitat for Humanity, among others.

“Our lives do not end when our bodies become disabled. When PWDs stop working and sulk in their little corner, they will die,” says Bayani.  “But some people, when they see PWDs, would give us money and think we’re begging.”

With the housing project on the horizon, dignity among PWDs should become a given.  Access Ville, says Montilla, is a chance for them to have their own homes, which, in turn, can help them live decent lives.

“I hope the PWDs will not be afraid to try, dream and work hard,” she says.  “Success comes when one is able to accept his limitations and disabilities, and conquer it.” —With reports from Lawrence Llacer and Jasmin Jatt Salvacion