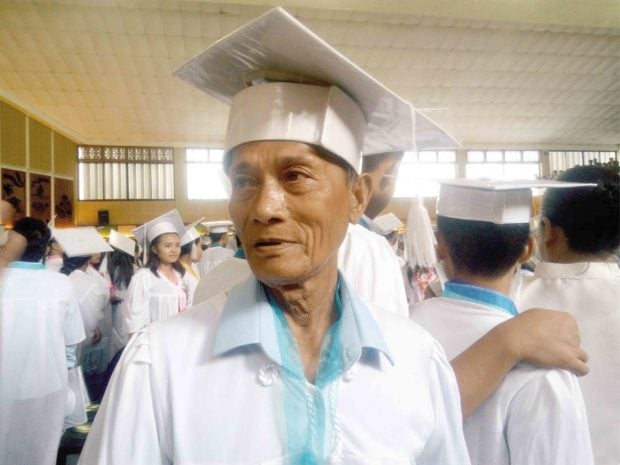 TAGBILARAN CITY, Bohol — Donning a white toga and a graduation cap, the 69-year-old farmer was in a hurry.

He was already 30 minutes late for the first senior high school recognition rites of Dr. Cecilio Putong National High School at the Bohol Cultural Center in this city, but Virgilio Ganade Penticase still drew the loudest applause when he stepped onstage to receive his diploma.

Fondly called “Tatay” (father) by his classmates, he was the oldest graduate in the school’s history — a distinction made even more remarkable by his inclusion in the pioneering batch of senior high graduates under the K-12 education reform program.

Teachers hugged and congratulated Penticase, while fellow graduates and their parents posed for selfies with him.

Other students expressed admiration for the sexagenarian, among them Jhon Rel Alagadmo.

“If he can do it, why can’t we?” said Alagadmo, who aspires to be a merchant marine.

Class adviser Haidee Felisilda said: “Even at 69 years old, he was determined to learn and finish Grade 12. He showed everyone that poverty and age should not be a hindrance to our dreams.”

For Penticase, knowing he had become an inspiration to others made his academic achievement even sweeter.

Despite age-related health issues like arthritis and poor eyesight, the unmarried Penticase attended his classes regularly in the last six years, making the daily 30-minute commute from the Dauis home that he shares with younger brother, Leonardo, 68.

Leonardo, who works in a farm, fell ill on the day of the graduation and could not witness his older sibling’s proud moment. But he was actually the one who persuaded Virgilio to go back to school.

“I am thankful that God gave me good health to finish high school,” said the new graduate who, after completing grade school, had to wait for decades to resume his studies because of poverty.

During the long gap, Penticase eked out a living growing bananas and vegetables, and encountered people who took advantage of his lack of education.

“Many times I was shortchanged because I didn’t know how to compute,” he recalled. “If you’re uneducated, it is easy for others to cheat you.”

In June 2012, Penticase presented his old school records to the high school principal, Concepcion Bagotchay, who initially turned him down.

“I was hesitant to accept him because he was already a senior citizen and I was afraid he might teach the children some shenanigans,” recounted the principal of Dr. Cecilio Putong National High School.

But Penticase was so insistent on enrolling that Bagotchay finally relented.

The principal’s initial worries proved to be baseless. The man she first thought might be a troublemaker turned out to be a diligent learner.

Penticase passed all his subjects, with Filipino and social studies as his favorites.

And despite being a sexagenarian, he got to enjoy one of the perks of being a student: a discount on jeepney and tricycle fares.

Turning 70 in June, Penticase is apparently just warming up: “I want to take up Commerce,” he said.