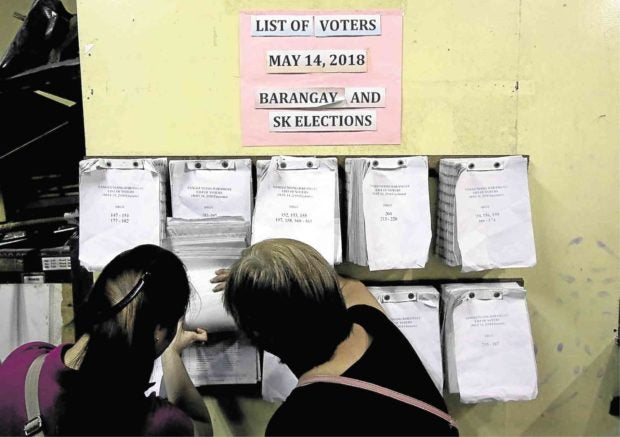 Voters look for their names on a list at the Commission on Elections office in Arroceros, Manila, on Friday, a day before the poll body starts accepting certificates of candidacy for the May 14 barangay and Sangguniang Kabataan elections. —RICHARD REYES

The Commission on Elections (Comelec) will begin accepting certificates of candidacy (COCs) for next month’s barangay and Sangguniang Kabataan elections on Saturday, April 14.

The Comelec on Friday said a nationwide gun ban would be imposed starting on Saturday and throughout the election period until May 21, during which employing bodyguards would also be prohibited.

Aspirants have to submit their COCs by April 20.

President Duterte warned those running in the polls and involved in illegal drugs that they would be dealt with like the other offenders in his brutal antinarcotics campaign.

Speaking to reporters in Davao City early on Friday on his return from a trip to China, Mr. Duterte said he was considering whether to make public his list of aspirants in the village polls who were involved in the drug trade.

“I will sleep on that issue. I’ll give it a thought,” he said.

Mr. Duterte said he wanted to make sure that any move he made “does not affect the freedom of the people to elect their own leaders because this is democracy.”

He said he had “zero tolerance for drugs” and would give “no middle ground” to offenders.

“I am not toying with the drugs problem … no quarters given, no quarters asked,” The President said. “I have been telling you—barangay captains, others are municipal mayors and city mayors—they were dying because they got involved [in the drug trade].”

The barangay elections have been postponed twice after Mr. Duterte claimed that protectors of drug traffickers and dealers would be fielding their own candidates.

The barangay and Sanggunian Kabataan (SK) polls were finally set by Congress for May 14.

Carrying and transporting firearms and other deadly weapons and the hiring of private security are prohibited without exemptions from the Comelec.

Only members of the Philippine National Police, Armed Forces of the Philippines and other law enforcement agencies who are duly deputized by the Comelec for election duties—and who must be in uniform—are authorized to carry firearms during the election period.

The positions to be contested in the barangay polls are the barangay chair and seven members of the Sangguniang Barangay, or village council.

The youth elections are for one chair and seven members of the SK in each village.

A candidate in the SK polls must be a Filipino citizen, a qualified voter of the Katipunan ng Kabataan and a resident of at least one year in the barangay where he is seeking office.

The candidate should be at least 18 years old but not more than 24 years old on election day; able to read and write Filipino, English or the local dialect; and must not have been convicted by final judgment of any crime involving moral turpitude.

For the first time, a law aimed at curbing political dynasties would be implemented, but only for the SK polls. It requires that an SK candidate must not be related within the second civil degree of consanguinity or affinity to any incumbent elected national official or to any incumbent elected regional, provincial, city, municipal or barangay official.

A candidate for the village council must be a Filipino citizen, a registered voter and resident of the barangay where he seeks office. He must be able to read and write Filipino or any other local language or dialect and at least be 18 years old on Election Day.

Eduardo Año, officer in charge of the Department of the Interior and Local Government (DILG), reminded candidates that the Local Government Code prohibited any local elective official from serving more than three consecutive terms in the same position.

“Do not file your candidacy if you will go beyond the third term or consider running for another post,” Año said in a statement. “Better yet, let the others have their chance to become barangay leaders.”

The PNP said 5,744 barangays were considered election hot spots due to intense political rivalry, the presence of private armed groups and a history of election-related violence.

Most hot spots in Bicol

PNP spokesperson, Chief Supt. John Bulalacao, said the Bicol region had 1,258 election hot spots, the biggest number in the country, followed by the Autonomous Region in Muslim Mindanao (ARMM) with 832 barangays and Central Luzon with 504 barangays.

He said PNP personnel might be tapped for election duties in the ARMM because teachers in the region would no longer act as election officers.

Bulalacao noted that ARMM had the most number of active private armed groups—72 out of 78 nationwide—based on data from the PNP directorate for intelligence.

The other private armed groups could be found in the Ilocos region, Central Luzon, Calabarzon, the Cordillera Administrative Region and Bicol region.

The PNP spokesperson said there were 516 insurgency-affected barangays and 2,152 barangays threatened by communist rebels.

“The various threat groups may take advantage of the election period purposely for them to continue to broaden their sphere of influence by supporting a certain candidate and improve their financial condition by collecting permits to campaign fees from candidates,” he said.