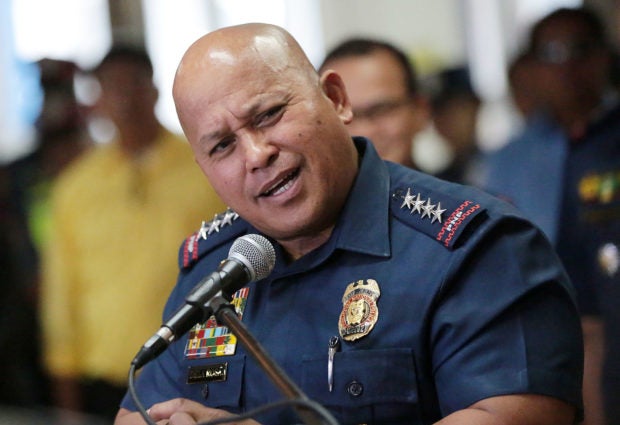 If there was, it would be the policemen who died during the anti-drug war, he added.

De la Rosa, who was scheduled to retire next week, gave an unsolicited advice to his successor, Director Oscar Albayalde: Continue the drug war, and temper his leadership with love and discipline among his men.

“I am very happy. I am very thankful to the President for appointing me in the PNP (as its director general) and for giving me all the support that he could give,” he said on Thursday night.

“(Now that I am about to retire), I am very sad. I love the job. I love everything about the PNP. Mahiwalay ka na (Now, I will be separate from the PNP). It’s very lonely,” he added.

De la Rosa visited Camp Ruperto Kangleon, headquarters of the PNP in Eastern Visayas based in Palo town, Leyte province as part of what he called a “farewell tour.”

De la Rosa said that during his stint as PNP chief, the 170,000-strong organization had several accomplishments.

Among these, he added, were that the PNP was brought closer to the Filipino people and the trust on the men in uniform had been restored.

While illegal drugs continued to proliferate in the country, he said he was proud that the PNP under his leadership was able to reduce it.

“Yan ang pangarap ko na maging drug-free ang Pilipinas pero hindi pa natin naabot. At least nabawasan (That’s my dream that the Philippines will be drug-free but we were not able to reach it. But at least we have reduced it),” he added without citing figures.

De la Rosa asked his successor, Albayalde to continue the illegal drug campaign, describing it as the “mother of all projects” of the President.

“I (advise) him to continue (the illegal drug campaign). Tuloy-tuloy yan. I will also advise him to continue loving his men. Love does not come from pampering your people but disciplining (them) also. That’s how we express our love to our family, subordinate and everyone. Mahal mo ang tao, disiplinahin mo (If you love the person, you should discipline him),” he said.

Asked about his immediate plans before he assumed his new post as head of the Bureau of Corrections, De la Rosa said he would take a vacation with his wife and children.

“Gusto ko munang magbakasyon. Matagal akong nagtrabaho (I want to go on vacation. I had been working for a long time). I want to hug my children and my wife. I want to be there with them. It’s payback time,” he said.

Asked what he would do if President Duterte would ask him for an elective post in 2019, he said he would abide by it.

“I’m not making my own plans. Dependent ako sa kanya. Kung ano ang gusto niya ipagawa sa akin, gagawin ko (I am dependent on the President. Whatever he wants me to do, I’d do it),” he said.