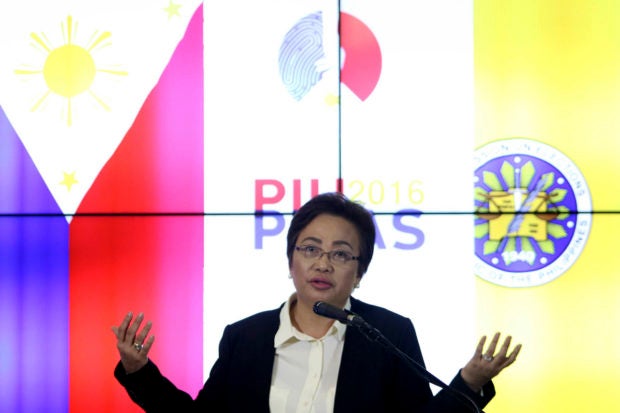 BACOLOD CITY-Commissioner Rowena Guanzon of the Commission on Elections has warned candidates for barangay posts to be truthful in their certificates of candidacy (CoC), especially their affiliations with political parties, or face the consequences.

She cited Item Number 10 on the CoC that candidates sign under oath, that states “I am not a member of any political party, group or coalition of political parties.”

“I am cautioning that they have to answer truthfully, because if they don’t there will be consequences,” she said.

Membership of a barangay candidate in a political party under Section 51 of the Omnibus Election Code (OEC) is a prohibited act, and shall be prosecuted and penalized, in accordance with the provisions of the OEC, as a criminal offense, she said.

The barangay and Sangguniang Kabataan elections should be nonpartisan, Guanzon stressed.

“I am asking all elected officials, especially the mayors, to keep their hands off the barangay elections because there is a law that it should be a non-partisan election” she said.

To be fair to everyone, she said, they should not give, especially the incumbent barangay officials, an unfair advantage over others, by supporting them financially.

If the elected officials give money to the barangay and SK candidates during the campaign, she added, that would really be a serious violation of the election law.

Guanzon, who spoke at the Provincial and City Treasurers Association of the Philippines conference in Bacolod on Wednesday, also stressed the importance of the treasurers’ roles in preserving democracy during the elections as guardians of the ballot boxes and ballots before and after the polls.

“They should be faithful to the country first before they are loyal to any politician or elected official,” she said.

Guanzon said she would bring up to the Comelec en banc the possibility of allowing watchers to take photographs or videos during the counting for the sake of transparency.

“This is because the votes in the barangay and SK polls are counted manually, and one could win by just one vote,” she explained.

Aside from giving people confidence in the transparency of the elections, it will also help in cases of election protests, she added.

The election period, which also signals the start of the gun ban, will be from April 14 to May 21 .

Guanzon reminded the police to follow the plain “view rule” in the checkpoints, where they are not allowed to inspect inside a vehicle or make passengers step out. They could only make an arrest if a gun or deadly weapon is seen in plain view.

The checkpoints should have the number and the name of the assigned election officer so victims of human rights violations would know where to report./lb