But Secretary Menardo Gueverra doesn’t specify what ‘things’ he was talking about
By: Tetch Torres-Tupas - Reporter / @T2TupasINQ
INQUIRER.net / 06:17 PM April 11, 2018 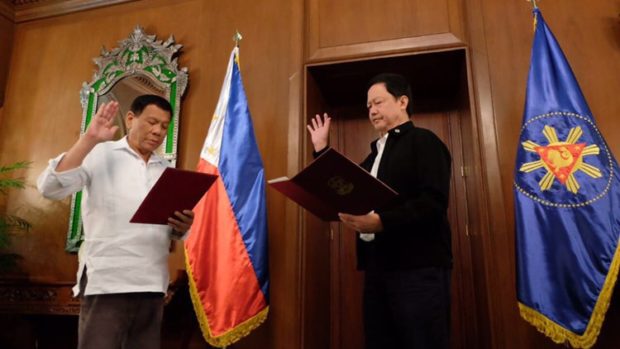 Former Justice Secretary Vitaliano Aguirre II would have stayed on at the Department of Justice (DOJ) if not for some “debacle” that affected the trust and confidence of President Rodrigo Duterte, newly appointed Justice Secretary Menardo Guevarra said.

“Probably, if only these things did not happen, if these series of events that sort of raised eyebrows on the part of the public about the actuations of the DOJ [did not happen], I believe Sec Vit [Aguirre’s nickname] would still be enjoying the trust of the President and would continue to be the DOJ secretary,” Guevarra said.

But he did not to give details about the “things” he was referring to.

To his knowledge, Guevarra said the President was satisfied with the performance of Aguirre, who happened to be his schoolmate and a Lex Talionis fraternity brother.

“It just so happened that there are certain things that are beyond your control,” Guevarra said.

Aguirre resigned from his post early this month following the furor on the dismissal of the drug cases against businessman Peter Lim, self-confessed drug distributor Kerwin Espinosa, convicted drug lord Peter Co, and several others.

The former Justice secretary stood by the prosectors who dismissed the cases, even with the filing of a complaint by the Presidential Anti-Corruption Commission (PACC).

Aguirre said the PACC was not familiar with the procedures of the DOJ.

Guevarra said the events happened so fast that he had yet to meet with his predecessor to discuss “transitional matters.”

“We have not yet had the chance to talk,” he said. “Maybe after he has settled down, relaxed a bit. Maybe I would invite him for a cup of coffee to discuss transitional matters. Sec Vit, I admired him a lot. I know him to be a very good person and I highly respect him because we worked together in the same administration and I saw how he worked.”

He said the last time he met Aguirre was in Malacañang after talking to Executive Secretary Salvador Medialdea.

“I asked how he was doing because I heard that he just came from a hospital for a medical check up,” he said.

The new Justice secretary said the President gave him a free hand to replace people.

“First order of business to familiarize myself with the various functions of the DOJ as a lawyer. I know that I need to know the nitty gritty of the DOJ. basically to know the key people here. To determine for myself if there is a need to make new recruits, to introduce new people to help me out in the doj. so basically organizational muna,” he noted.

“Like any person who is new into the job I would like to have people in my confidence, but I want continuity. I don’t want abrupt.  I have a lot of respect with people who have been here in some time even those under previous and present organization,” he added.

Guevarra said the President would not intervene in his way of performing his duties.

“He expressly stated he would not interfere in any way in the discharge of my functions as secretary of justice,” Guevarra said. /atm