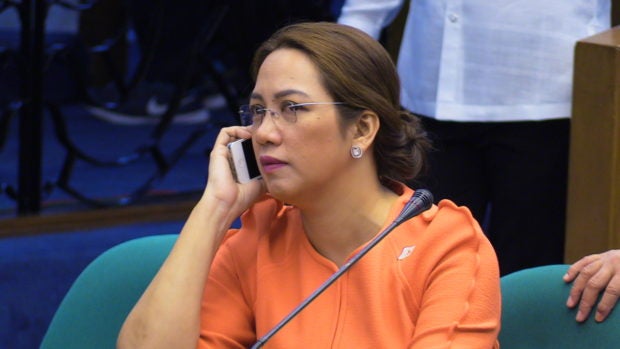 Former Health Secretary Janette Garin on Wednesday downplayed the Senate committee draft report on Dengvaxia as “full of inaccuracies and half truths” and a “one-sided” story that only reflects Senator Richard Gordon’s opinions.

“I believe that the narrative is full of inaccuracies and half truths, which reflects only the long perceived pre-judgment of the issue by Senator Gordon,” Garin said in a statement. “The presentation is one-sided and replete with innuendos of expedited government action. Timely and responsive government action is not a violation of the law.”

“Moreover, the ‘report’ is just the personal opinion of Senator Gordon, which has not been vetted by the Senate. The report is one-sided because he has prejudged the case from the very beginning based on the inputs of vested interest parties who want to control the DOH (Department of Health),” she added.

The former DOH secretary added that it was former Secretary Enrique Ona Jr. who declared that there was a dengue epidemic when he was secretary of DOH. She also raised that former DOH Secretary Paulyn Ubial continued and expanded the program.

“It is manifest that the anti-dengue program was important because Secretary designate Ubial continued and even expanded it!” Garin said.

“My conscience is clear and I am ready to answer any charge that will be filed in the proper forum,” she added.

It recommended that Garin, former President Benigno Aquino III, former Budget Secretary Florencio Abad and other former officials be charged for violating among others the Anti-Graft and Corrupt Practices Act and the Code of Conduct and Ethical Standards for Public Officials and Employees.

The draft report also recommended the filing of case against French pharmaceutical giant and Dengvaxia manufacturer Sanofi Pasteur for violating provisions of the Civil Code on Quasi-delicts.

Gordon is set to submit the report to the committee members for signature before presenting it to the plenary for approval.

Current Health Secretary Francisco Duque III ordered the suspension of the vaccination when French pharmaceutical giant Sanofi Pasteur bared in November 2017 that Dengvaxia could worsen symptoms of the disease for people who had not previously been infected by the virus.

The anti-dengue vaccine was given to more than 830,000 children in areas with high number of dengue cases during Aquino’s term. The program was later expanded under President Rodrigo Duterte’s watch. /jpv