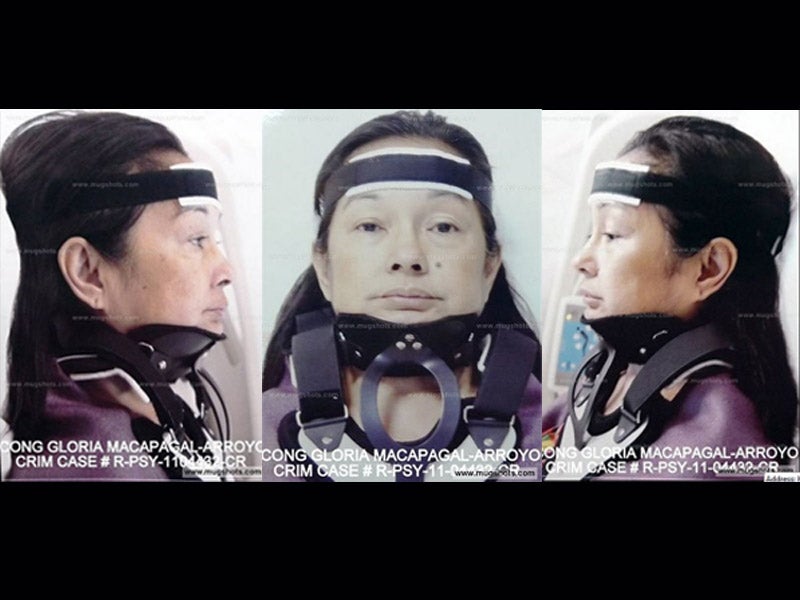 As if her troubles were not enough, former President and now Pampanga Representative Gloria Macapagal-Arroyo will be slapped Tuesday with a civil case for her alleged role in the gruesome Maguindanao massacre, a lawyer of the victims said Monday.

Arroyo, who is under hospital arrest in Taguig City on charges of electoral sabotage, is also facing plunder charges in the Office of the Ombudsman.

A lawmaker and two other complainants said that while Arroyo had been charged with electoral sabotage, there was still a need to make her accountable for alleged acts of corruption during her nine-year tenure in Malacañang.

The three asked the Office of the Ombudsman on Monday to immediately resolve the plunder case against Arroyo over the scuttled $329-million National Broadband Network (NBN) deal.

Harry Roque, who represents the kin of 13 media workers and two bystanders slain in the massacre on Nov. 23, 2009, said his clients would ask the Quezon City Regional Trial Court to order the former President to pay a total of P15 million in damages.

“We will file a civil case against her for her complicity in the Maguindanao massacre. She is responsible for coddling and abetting those behind the killings and for violating the rights of the victims,” Roque said in an interview.

The massacre claimed the lives of 58 people, including 33 media workers, two years ago.

The government has charged members of the Ampatuan family—close allies of Arroyo when she was in power—and their supporters for the massacre.

The killings in Ampatuan town, Maguindanao province,  is considered the worst election-related case of violence in the country. The remains of the 58th victim have yet to be found.

The 33 media workers were part of a convoy traveling with the wife of Esmael Mangudadatu who was going to file her husband’s certificate of candidacy. Mangudadatu’s wife was accompanied by women relatives and friends. They were all killed. Six other civilians who happened to be passing by were also killed.

While planning to formally charge Arroyo, Roque said his clients also vented their ire on President Benigno Aquino III for reportedly saying that he expected the trial of the massacre case to go beyond his term.

“The widows are really unhappy because he is the President and they expected him to do everything within his power to achieve justice in this case but, with his statement, he has thrown in the towel or raised the white flag,” Roque said.

He pointed out that the alleged election cheating machine that the Arroyo administration had in Central Mindanao began to unravel after the Maguindanao massacre.

In an urgent motion to resolve the case, the complainants—Bayan Muna Representative Teodoro Casiño, former Gabriela Representative Liza Maza and Carol Araullo of Bagong Alyansang Makabayan—said Arroyo could use the delays in filing cases against her to her advantage.

“We are witnesses on how delay in the filing of an appropriate case could have almost allowed GMA (Arroyo) to leave the country and escape liability from her illegal acts, had the Commission on Elections not filed an electoral sabotage case,” they said.

Arroyo tried last week to fly abroad for medical treatment after the Supreme Court lifted the watch-list order against her, but she was stopped from leaving by immigration officials on orders of Justice Secretary Leila de Lima.

Before Arroyo could attempt to leave again, the Pasay City Regional Trial Court ordered her arrest for electoral sabotage.

The complainants in the plunder case also said that although Arroyo was facing a criminal charge, this was not enough.

“There is still a need for the filing of information from cases like the corruption charges in the NBN-ZTE transaction,” they said.

Casiño, Maza and Araullo said the “people have waited for years for the respondents to face these charges.”

They also asked the Office of the Ombudsman not to grant any request from Arroyo for additional time to respond to the complaint, saying she had been granted an extension earlier.

If Arroyo failed to file her response at the proper time, she should be deemed to have waived her right to file it, the complainants said.

The Arroyo administration shelved the NBN deal with China’s ZTE Corp. amid allegations of bribery and overpricing.

Abalos and Romulo Neri, former director general of the National Economic Development Authority, are undergoing trial in  the Sandiganbayan in connection with the criminal cases filed against them for their role in the scuttled deal.

Rafanan said the Office of the Ombudsman would evaluate the case based on the facts. It would not file cases haphazardly and would not be moved by emotions, he said.

He also said that if the agency would file cases, it wanted to make sure these were airtight.

Last month, at her first press conference, Ombudsman Conchita Carpio Morales said she would focus on high-profile cases and would make sure that cases filed were airtight. But she also said she did not want to go berserk filing cases if there was no case just to please the public.