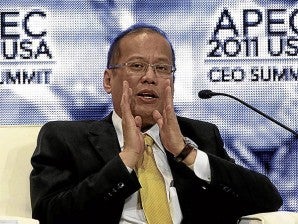 President Benigno Aquino III has hailed the arrest of his predecessor, former President and now Pampanga Representative Gloria Macapagal-Arroyo, as proof his antigraft drive is working but analysts say much more needs to be done to end the country’s corruption plague.

Arroyo, who ruled the Philippines from 2001 to 2010, was charged on Friday with rigging senatorial elections, and Mr. Aquino has vowed to pursue her for a wide range of other corrupt acts she allegedly committed while in power.

“This is the fruit of our reforms to fight corruption. The principle behind these reforms is that the guilty must be made to account,” Mr. Aquino said over the weekend in his first comments on Arroyo since she was arrested.

Mr. Aquino won a landslide election victory last year after campaigning almost exclusively on a platform of ending widespread corruption across all sectors of society, which is one of the main reasons for the country’s crushing poverty.

The bachelor President and son of a democracy heroine is widely regarded as being corruption-free and he has used his clean image as one of the key drivers in trying to change the public’s tolerance for graft.

Mr. Aquino has also vowed to hold even the most powerful people to account, and has made the pursuit of Arroyo one of his administration’s top priorities.

Arroyo stood down last year with opinion polls showing her to be the most unpopular Philippine leader since dictator Ferdinand Marcos of the 1980s, largely because of the belief she was corrupt.

She is alleged to have approved multimillion-dollar government contracts that enriched herself, her family and supporters. Arroyo is also accused of cheating to win the 2004 presidential election. She denies all the charges.

Political analysts say that, while the determination of Mr. Aquino and his aides to hold Arroyo to account signals a good intention to fight graft, they have not yet taken the major reforms needed to dig out the roots of corruption.

“Their idea seems to be to get one big fish, but that won’t be enough,” said political science professor Francisco Magno of De La Salle University.

“It has to go beyond the campaign promises, the rhetoric of change.”

Magno said one of the government’s top priorities should be to strengthen agencies that held officials to account, such as the Office of the Ombudsman.

“The (watchdog) institutions are weak. They need to be strengthened, put more resources, put in more lawyers and pay them better,” he said.

Political scientist Bobby Tuazon, director of the Center for People Empowerment in Governance, criticized Mr. Aquino for backtracking an election campaign to back a freedom of information bill.

“By backtracking … he is sending a mixed signal of whether he is serious in the fight against corruption,” Tuazon said.

On a macro level, Tuazon said the entire political system of patronage, which was entrenched more than 100 years ago during US colonial rule, needed to be addressed if corruption was to be seriously tackled.

Under this system, politicians hand out the spoils of office to their supporters in exchange for their loyalty, or seek bribes in return for contracts or favors, Tuazon said.

“Bribery is an institution,” he said.

Tuazon alleged that Arroyo was one of the most flagrant offenders, but that corruption infested all levels of politics.

“Political patronage is usually identified with the president. But if you go down the line, it is also real in Congress, provincial governments, local governments, even down to the village level,” he said.

Unexplained wealth for politicians is a common theme across the Philippines.

Provincial governors earn just P50,000 ($1,150) a month while city mayors make about P45,000, according to Mars Buan, a political scientist who advises firms for risk consultancy Pacific Strategies and Assessments.

But Buan said in many parts of the country, the houses of governors, mayors and other politicians were usually the most luxurious, and would cost much more than their salaries allowed.

“There are hazy ethics, low salaries, the pressure of the system . . . the need to get back all the money they spent in elections,” Buan said in describing Filipino politics.