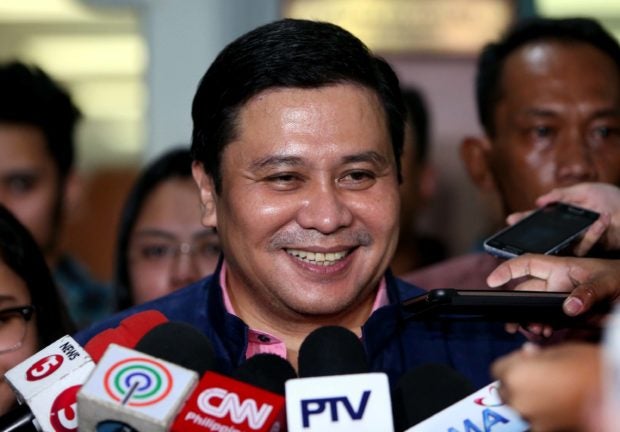 Plunder accused Jinggoy Estrada, former senator who is now out on bail, said he was being courted by the administration Partido Demokratiko Pilipino-Lakas ng Bayan (PDP-Laban) to run for senator on its slate, but negotiations were still being finalized.

He said “someone” from the ruling party approached him. He refused to identify who.

He said, though, that he was definitely running for senator in 2019 even if it meant him and his half-brother Sen. JV Ejercito would occupy Senate seats at the same time.

“I will run under the administration ticket,” Jinggoy said.

Another option, he said, was for him to run as an independent, “but I will be supportive” of President Rodrigo Duterte “no matter what happens.”

He said still another option was for the party founded by his father and which he now leads as its president, Partido ng Masang Pilipino, to coalesce with PDP-Laban.

Jinggoy, in an interview on Tuesday, said his father, former President Joseph Estrada, a pardoned plunder convict, did not mind at all that his two sons vied for the same position in the mid-term elections.

“He wants us to run together,” Jinggoy said of his father.

Jinggoy is the former President’s son with wife Loi, while JV is Joseph Estrada’s son with partner Guia Gomez, who is currently mayor of San Juan City.

Jinggoy said he had no problem if both he and JV ended up as party mates.

“I can work with anybody,” Jinggoy said.

Jinggoy was recently freed from jail where he had been detained for alleged plunder for the misuse of his pork barrel funds on ghost projects of bogus nongovernment organizations formed by alleged pork barrel scam brains Janet Lim-Napoles.

He still faces trial for the case.

Jinggoy said it was only JV who had been saying that only one Estrada should be in the Senate.

“Why deprive me?” said Jinggoy. “Maybe the reason he said only one Estrada should run was because he was referring
to me because I’m an Estrada,” he said.

He declined to answer, though, when asked if he felt he and JV would both win.