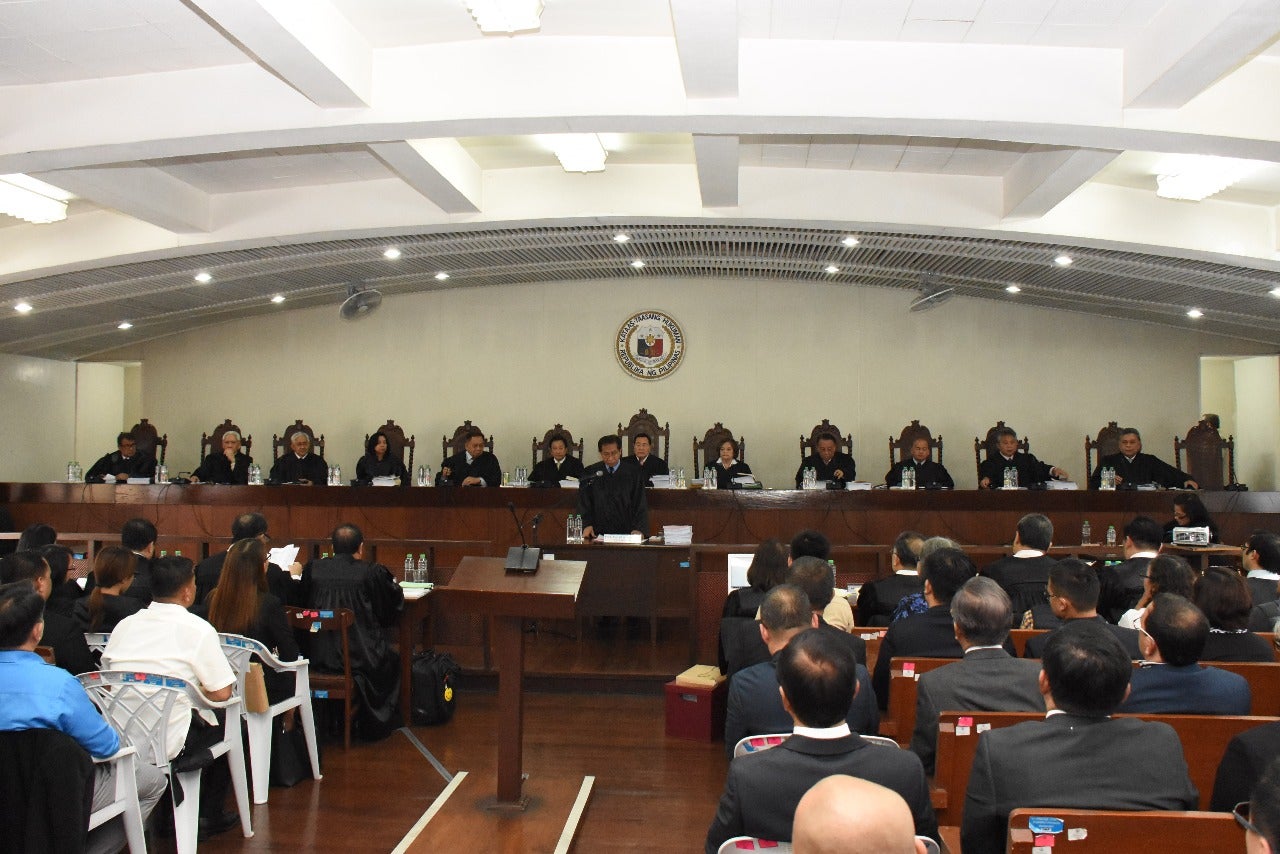 Chief Justice Maria Lourdes Sereno on Tuesday challenged her colleagues in the Supreme Court to undergo the same proceedings like her should a similar quo warrant petitions be filed against them.

The oral argument, which was unprecedented, had the Chief Justice on the other side, arguing her case.

A quo warranto petition has been filed against her by Solicitor General Jose Calida. Calida said since Sereno failed to comply with the requirements of submitting her statement of assets, liabilities and networth (SALN), her appointment as chief justice was not valid.

Calida said being unqualified for her post, Sereno can be ousted from office sans impeachment trial.

De Castro grilled the embattled Chief Justice, who was required by the High Court to answer questions under oath, on the statements of assets, liabilities and net worth (SALNs) she submitted to the Judicial and Bar Council (JBC) during her applications for associate justice in 2010 and chief justice in 2012.

De Castro even accused Sereno of failing to religiously comply with Section 7 or Republic Act No. 3019 which requires every public officer, within 30 days after assuming office, and within the month of January of every other year thereafter, as well as upon the expiration of his term of office, or upon his resignation or separation from office a true detailed  and sworn SALN, including a statement of the amounts and sources of her income, the amounts of his personal and family expenses and the amount of income taxes paid for the next preceding calendar year.

“You’re  making a lot of excuses for not filing your SALN… You are blaming everyone, but the point is have you religiously filed your SALN?,” De Castro told  the Chief Justice.

De Castro noted that Sereno failed to provide the JBC copies of her SALN which she was supposed to file while she was still working for the University of the Philippines (UP) for a period of 20 years as well as her confusing SALNs that she submitted to the JBC in 2010.

Sereno denied the allegation, calling the interpretation of De Castro of the SALN requirement as “absurd, unreasonable and oppressive.”

For his part, Associate Justice Francis Jardeleza said Sereno was making excuses on why she failed to present her missing SALNs.

“It seems to be you are layering  a lot of reasons about why you did not file. You are not presenting us evidence to the contrary, your assertion is that you filed [your SALN],” Jardeleza said.

“Integrity is doing the right thing even if no one is watching. Did she or did she not file a SALN?” he added.

Associate Justice Marvic Leonen, for his part, pointed out that failure to comply with the SALN requirement appears to be not a major violation to constitute “lack of proven integrity.”

The magistrate stressed that integrity issue should involve bigger allegations such as corruption.

But Solicitor General Jose Calida insisted that Sereno did not meet the eligibility of proven integrity due to her false and incomplete SALNs.

“It is demanded by no less than our Constitution that a  public officer or employee shall, upon assumption of office and as often thereafter as may be required by law, submit a declaration under oath of his assets, liabilities, and net worth,” Calida added.

Sereno’s lawyer Alex Poblador, on the other hand, said the government is simply scared to take Sereno’s case to the Senate that is why they are trying a shortcut.

The high court already wrapped up the oral argument and ordered both parties to submit their memoranda on or before April 20. After that, acting Chief Justice Antonio Carpio said the case is deemed submitted for resolution.