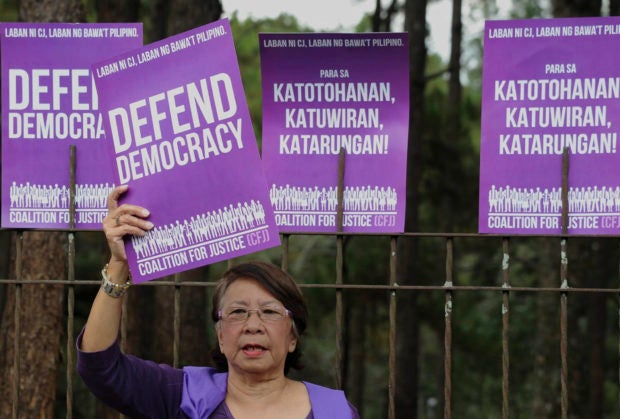 BAGUIO PROTEST A member of the Coalition for Justice airs her group’s demand to dismiss the quo warranto petition filed against Chief Justice Maria Lourdes Sereno during a picket at the Baguio compound of the Supreme Court. The high court will hear oral arguments in the case on Tuesday. —EV ESPIRITU

Five of Chief Justice Maria Lourdes Sereno’s colleagues on the Supreme Court are “not inclined” to stay away from the deliberations on the quo warranto petition brought against her by Solicitor General Jose Calida, according to two court insiders.

The five — Associate Justices Teresita Leonardo-De Castro, Diosdado Peralta, Lucas Bersamin, Francis Jardeleza and Noel Tijam — were among the eight magistrates who testified against Sereno in the impeachment proceedings in the House of Representatives.

Along with eight other justices, they forced Sereno to take an indefinite break from her work on the high court since March 1 to prepare for her expected impeachment trial in the Senate.

The five justices also openly joined the “red Monday protest” staged by some court employees and judges to urge Sereno to step down amid efforts by President Rodrigo Duterte’s allies to unseat her.

One of the court sources told the Inquirer on Monday that the five justices submitted on Friday a draft resolution of their separate decisions denying Sereno’s petition for inhibition.

“All of them were not inclined to grant her motion for inhibition. They believe the reasons the Chief Justice raised against them were all baseless,” the source said.

Their decisions were expected to be released on Tuesday before the start of the much anticipated face-off between Sereno and her fellow magistrates during oral arguments on the quo warranto petition at the Supreme Court session hall in Baguio City.

Tijam, the President’s second appointee to the 15-member tribunal, has been supposedly assigned to write the majority opinion on Calida’s legal action.

The source said Tijam belittled Sereno’s claim that he had already prejudged Calida’s petition when he said that she could be held for “culpable violation of the Constitution” after she ignored the invitation of the House justice committee to appear in the impeachment hearings.

Tijam also played down as “merely coincidental” his wearing a red necktie when judges and court employees started their weekly protest on March 5, the court insider said.

“For Justice Tijam, the allegations the Chief Justice raised were just conjectures as they were not supported by sufficient evidence,” the source told the Inquirer.

“Her statements merely tend to cast aspersion on the integrity and competence of the members of this court,” the court quoted Tijam’s draft resolution.

Another source said Bersamin, an appointee of former President Gloria Macapagal-Arroyo, had rejected for lack of merit Sereno’s insinuation of partiality against him after he referred to her as a “dictator” during the House impeachment hearing.

Like Tijam, the court insider said Bersamin maintained that his decision to wear a red necktie on March 5 had nothing to do with the anti-Sereno rally.

“Justice Bersamin contends that the Chief Justice’s accusations [are] pure ‘speculations or deliberate distortions’ of the words he uttered at the House impeachment hearings,” the source said.

“He also maintained that speculations and distortions [are] not enough reasons to seek the inhibition of a justice from adjudicating a pending legal issue,” the source added.

In asking some of her colleagues to recuse themselves, Sereno said she believed the five justices “cannot decide the quo warranto petition objectively and impartially.”

“Due process of law requires a hearing before an impartial and disinterested tribunal, and that every litigant is entitled to nothing less than the cold neutrality of an impartial judge,” Sereno said in her petition.