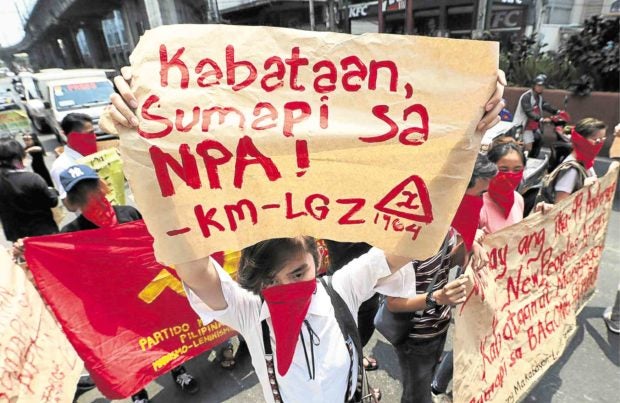 Students join a protest in Manila to commemorate the 49th founding anniversary of the New People’s Army. GRIG C. MONTEGRANDE

DAVAO CITY — Communist rebels have admitted responsibility for the April 4 ambush that killed a tribal leader and wounded two others in Magpet town, North Cotabato province.

Takinan, along with his escort, Rene Soriano, and Barangay Tagbac IP representative Robello Tambunan, came from Barangay Poblacion and were on two separate motorcycles on their way to Barangay Bantac when they were attacked at 4 p.m. on Wednesday last week.

“The standing order imposed by the NPA against Takinan stemmed from his active intelligence gathering activities, forced recruitment of indigenous peoples for the paramilitary Cafgu (Citizens Armed Forces Geographical Unit) Bagani fighters and assisting the military in its combat operations that resulted in grave human rights and international humanitarian law violations,” Santiago said.

She said the slain lumad leader also helped soldiers “terrorize” IP communities at Barangay Manobo in Magpet when he denounced them as communist supporters.

The police had tagged communist rebels as behind the ambush before the NPA released its statement.

“Bring the suspects before the bar of justice to restore the IP’s confidence in the government,” Catamco urged authorities.

She also called on Takinan’s relatives not to take the law into their hands.

“Let us not be carried by our emotions,” Catamco said. —Reports from Allan Nawal and Williamor Magbanua

Read Next
War vets, soldiers honored for selfless service
EDITORS' PICK
The Najima Drive: Nissan’s MD drives #GoAnywhere adventures in new video series
Can travel make you fall in love?
COVID-19 screening checkpoints remain for those going to Boracay
Can Your Brand of Meat Be Trusted? Here’s How to Know You’re Eating Safe Meat
COVID-19 has infected more than 69,000 people globally
Xi’s early involvement in virus outbreak raises questions
MOST READ
WATCH: Sarah Geronimo dances ‘fierce’ version of ‘Tala’
2,000 iPhones given for free by Japanese gov’t to passengers stuck on ship due to coronavirus
SC should have final say on VFA – Lacson
WATCH: Angeline Quinto sells isaw, balut, houseware on streets of Manila
Don't miss out on the latest news and information.