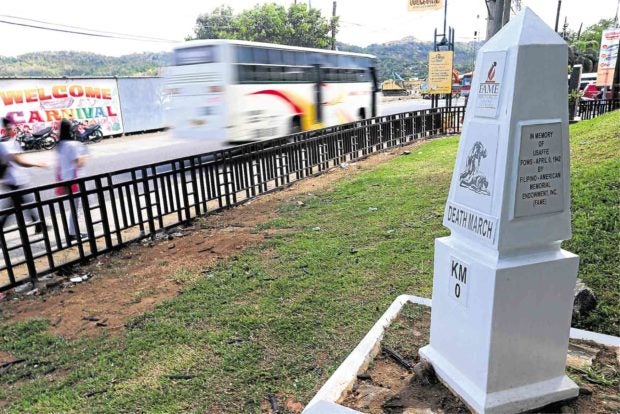 DEATH MARKER This spot at Mariveles town in Bataan province is known as Kilometer Zero of the Death March, where 76,000 Filipino and American prisoners of war started the long walk to Pampanga province during the Japanese occupation in 1942. —EDWIN BACASMAS

PILAR, Bataan — Weeks before the 76th commemoration of Araw ng Kagitingan (Day of Valor) on Monday, war veterans like Florentino Platero, 88, and Caesar Aguirre, 90, already took center stage when a bank gathered people to retrace the route taken by 76,000 prisoners of war (POW) during the Death March in April 1942.

The Death March began on April 11, 1942, and left thousands dead and seriously wounded after enduring torture under the hands of the Japanese Imperial Army. The prisoners were then loaded onto trains when they arrived at what is now the City of San Fernando in Pampanga province.

Platero and Aguirre were witnesses to the Death March atrocities. Waiting patiently at Orion town in Bataan, the war veterans soon met up with Freedom Trail marchers gathered by Philippine Veterans Bank on March 24 and 25.

Humbled, every marcher saluted Platero and Aguirre as they paraded through the Kilometer Zero Death March marker there.

“The great war tested the character of this nation and this honored ground is witness to the steadfastness and strong moral fiber of those who stood firm in their beliefs even in the face of overwhelming acts of deaths and defeats,” said Executive Secretary Salvador Medialdea, who addressed the veterans during the Araw ng Kagitingan commemoration at Mt. Samat National Shrine here.

Medialdea represented President Duterte, who was preparing to leave for China on Monday.

But the best way to honor the fallen soldiers was to remember them, which was what the two-day freedom walk intended to accomplish, Veterans Bank officials said.

“It will be a sin to forget how valiantly they fought and how they looked out for their fellow soldiers amid torture, injury and starvation,” said Mike Villa-Real, head of Veterans Bank’s corporate and consumer relations division.

“It is our generation’s responsibility to commemorate and honor the bravery and heroism of our veterans during the war,” he said.

“As long as I live, I will never forget what we had to endure during the war,” said Aguirre, who was 15 at the time of the Death March. He said he lost his father, who was forcibly taken away by Japanese soldiers.

Platero said he contemplated taking his own life after witnessing the harsh treatment of Filipino soldiers and civilians by the Japanese soldiers.

Like Aguirre, Platero said he believed his father was killed by Japanese soldiers. 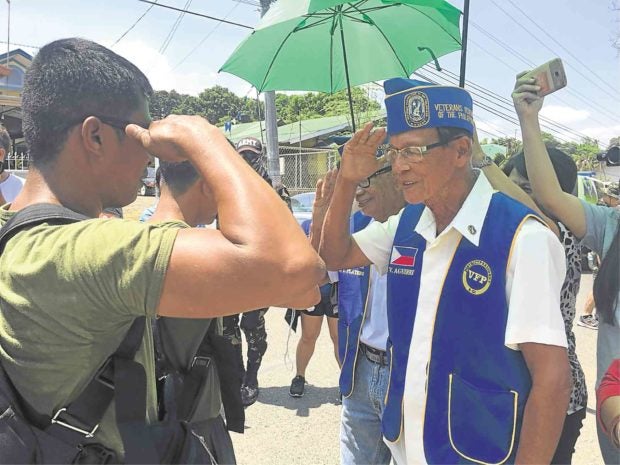 During the program at Mt. Samat shrine, Japanese Ambassador to the Philippines Koji Haneda said his country had pledged it would never lose sight of the lessons of the war and “had consistently walked the path that values peace and prosperity.”

Saying Japan had spared no effort to cultivate its friendship with the country for more than six decades, Haneda said this partnership “has expanded beyond trade, investment, development assistance to also include security and defense cooperation.”

“Valor is a simple word but it encompasses many thoughts—courage, dedication to one’s country, dedication to one’s principles and willingness to make the ultimate sacrifice that so many people did on that war,” said US Embassy Charge d’Affaires Michael Klecheski, who also attended the Mt. Samat event.

He said the United States and the Philippines “fostered a peaceful Asia, [and] those against whom we fought in that war have now become vital parts of that partnership as well.”

Read Next
In Nueva Ecija, rice harvest good, grain prices high
EDITORS' PICK
DOH: 28,471 new COVID-19 cases in PH; active cases now 284,458
On Day 2 of implementation, gov’t says workers now exempt from ‘no vax, no ride’ policy
Over 3 Million worth of prizes to be won at Smart Padala’s SENDali Manalo Promo!
Acer starts the year off strong with the Aspire Vero National Geographic Edition
Metro Manila posts lowest temperature yet this ‘amihan’ season at 19°C
Gear up and get ready to play with Yamaha Mio Gear
MOST READ
Derek Ramsay on being married to Ellen Adarna: ‘Gumaan ‘yung mundo ko’
Emma Stone calls Andrew Garfield a ‘jerk’ after he ‘lied’ about his ‘Spider-Man: No Way Home’ appearance
Lucky plants to grow in 2022
Retirements prompting major reshuffle in PH military
Don't miss out on the latest news and information.