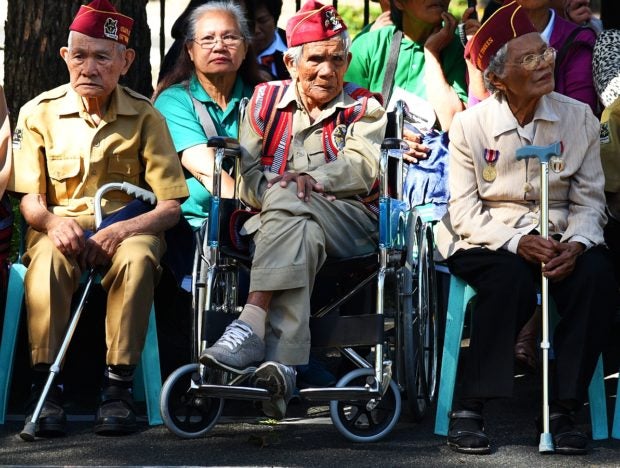 Some of the surviving war veterans, who fought to liberate Baguio City from the Imperial Japanese Army at the end of World War II, assembled at the Veterans Park for this year’s commemoration of Araw ng Kagitingan on Monday (April 9). Photo by EV Espiritu

Yamashita was caught by Igorot guerrillas and the Allied Forces in Kiangan town in Ifugao province, where he and his soldiers retreated, on Sept. 2, 1945. He was returned to the city, where the invading Japanese Army set up its headquarters, and formally signed surrender documents at Camp John Hay on Sept. 3.

Mayor Mauricio Domogan said April 9 recalls the valor and courage of soldiers who were forced to surrender to the invaders, “when American Gen. Douglas MacArthur fled the country, making the famous pledge, ‘I will return.’”

But there was bigger reason for the country to celebrate the defeat of the Japanese on Set. 3, the mayor said in a speech he gave at the Veterans Park, where a small number of surviving World War II assembled. The oldest veteran in attendance was 97-year-old Ognayon Tindugan.

A measure establishing Sept. 3 as a national holiday has been refiled in Congress, said Baguio Rep. Marquez Go. /je