Untold stories of PH war heroes kept in US archives 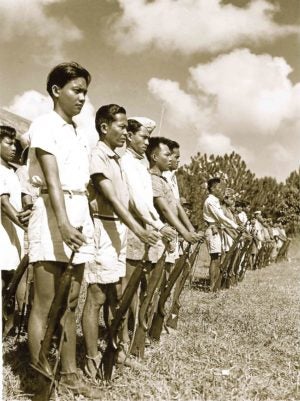 GUERRILLA FILES Heirs of Filipino guerrillas who fought the Japanese forces during World War II can now piece together their stories through photos such as this and other materials, thanks to the Guerrilla Unit Recognition Files, which can be viewed on the Philippine Veterans Affairs Office website.

CITY OF SAN FERNANDO — Patrocinio Gulapa was just a name then to his grandson, Reagan. But from the stories of his grandmother, Natividad, and from actor Ramon Revilla’s 1977 movie, “Gulapa: Ang Barakong Mayor ng Maragondon,” Reagan pieced together the exploits of a war hero.

At 14, Reagan began researching Gulapa’s life as a guerrilla leader during the resistance to the Japanese occupation forces in World War II. He wanted to know why his grandfather never got recognition or pension from the US and Philippine governments.

Gulapa founded the Anti-Hapon (AnHap), but it was its precursor, the Liberators Guerrilla, that the National Historical Commission of the Philippines (NHCP) immortalized with a marker at the Maragondon town plaza in Cavite province. When the NHCP unveiled the marker in October 2017, no guerrilla came.

Lt. Col. Mariano Villanueva, commander of the Liberators Guerrilla, and his 650 unrecognized officers and enlisted men must have all since died. Gulapa, a former mayor of Maragondon, was assassinated in 1948.

The recognition that Villanueva had sought, even after seeking the help of then President Manuel Roxas and Vice President Elpidio Quirino, became possible in June 2017 when Reagan got hold of the digitized copy of the US Army’s File 307-32 that held records of the Liberators. That file helped him alert the NHCP to the old guerrillas.

From those records, Reagan also learned that a murder allegation, which triggered a dispute between Gulapa and a popular guerrilla unit, turned out to be unfounded.

Gulapa led the Liberators’ “suicide squad” on the front lines to free Maragondon and Ternate, another Cavite town.

File 307-32 was among the Guerrilla Unit Recognition Files (GURF) that a team led by Marie Vallejo reproduced in 2015 by scanning declassified records belonging to the Philippine Archives Collection (PAC) stored at the US National Archives in Washington.

The Philippine Veterans Affairs Office (PVAO) uploaded the GURF on its website, enabling heirs like Reagan, as well as historians and students, to access information without going to Washington or the US National Archives and Records Administration.

“If not for the digital copy, I would not have known up close the story of the Liberators or they would have been forgotten forever,” said Reagan, 40, now a municipal councilor. He believed that a rival guerrilla group was behind the nonrecognition of Gulapa’s exploits.

The heirs of the Liberators have yet to revive claims for pension or seek monetary consideration.

“Legally, these cannot be given because the third Military Service Board, [that was] headed by [the late] Gen. [Fortunato] Abat was terminated in 2013,” said PVAO Administrator Ernesto Carolina. The board evaluated the claims of unrecognized World War II veterans.

The PVAO can only process and provide pensions after Congress passes a law creating the fourth Military Service Board, said Carolina, a retired Army general.

The belated recognition is the first outcome of the project.

Descendants of war veterans, Vallejo said, could also “find the names of their fathers and grandfathers, and what they did during those dark and courageous years, promoting pride in them.”

File No. 118-2 instilled pride in Elsa Ramos. The records of the Banal Regiment of Hukbo ng Bayan Laban sa Hapon (Hukbalahap) confirmed that her father, Arcadio, served as intelligence officer, with a rank of lieutenant, in the second platoon of Company C, Second Battalion, of the 7th Regional Command.

“Names, events and locations found in the records may be additional proof to names on lists or databases of veterans. It may also pinpoint the last location of the men killed or who are missing in action. Conflicts involving certain persons, activities and their whereabouts may be settled [by] the records,” Ramos said.

The GURF can also enrich Filipino knowledge about World War II. “The records are more meaningful because they were written by the men [who fought] in the trenches and [on] the front line. It is not at the command level of a general headquarters,” Vallejo said.

The files also contain data rarely seen before such as military operations, the treatment of prisoners of wars, guerrilla warfare, personal and unit histories, activities within guerrilla units, efforts to liberate the Philippines from Japanese control, and the conditions in the Philippines under Japanese occupation.

For Carolina, the PAC gives Filipinos the opportunity to write their versions of the war. He said an American version omitted the fact that Gen. Tomoyuki Yamashita, the military governor of Japan in the Philippines, was captured by Filipinos before he supposedly surrendered to the Americans. 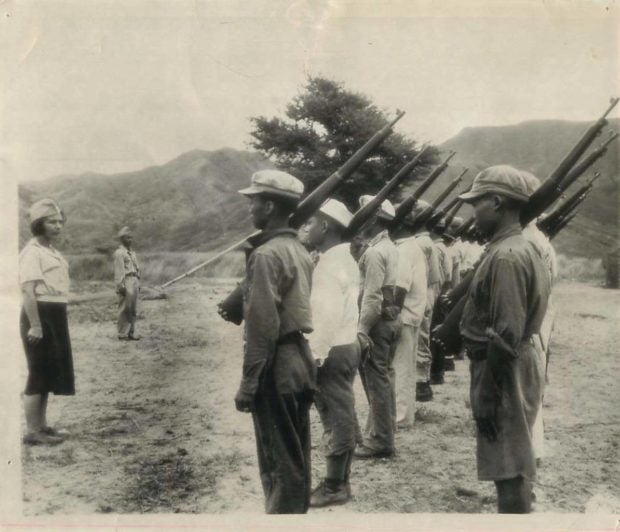 FEMALE COMMANDER Filipino guerrillas during World War II are shown with a female commander in one of the photos from the Guerrilla Unit Recognition Files in the US National Archives’ Philippine Archives Collection.

Vallejo came across the PAC in 2007 while researching the military experience of her father, Col. Saturnino Silva, who joined the 1st Filipino Infantry of the US Army’s 1st Reconnaissance Battalion.

Silva, a native of Bautista town in Pangasinan province, arrived in the United States in 1929 after teaching in Tawi-Tawi province.

From picking apples in California, Silva worked as a secretary, putting himself through school until he graduated from San Francisco State College in 1937. He fought in the war to liberate the country of his birth.

“I was shocked at the deteriorating condition [of the files] and wondered why these were not available in the Philippines,” Vallejo said. The fruit of her research was the book “The Battle of Ising,” about the guerrillas her father led in May 1945. It was published in 2009.

The previously unknown battle fought by the 130th Infantry Regiment Guerrilla, 107th Division of the 10th Military District in Mindanao, was decisive in preventing the Japanese from escaping to northern Mindanao as the Americans were retaking Davao.

Vallejo resumed her research in 2012 to look for more information about her father’s unit, a clandestine group under Gen. Douglas MacArthur.

“I felt that something had to be done about the crumbling records,” she said.

She approached retired Gen. Delfin Lorenzana, then head of the Office of Veterans Affairs of the Philippine Embassy in Washington.

“General Lorenzana patiently listened to my pleas about the records. We both knew that it was always a question of funds to form a team to digitize and bring back [the files]. When the team went in 2015, a large portion of the success of the team was due to his support in the administrative, setup and fulfillment of requirements in the US,” Vallejo said.

It was not easy pooling money for the project. Francisco Licuanan III added to the funds raised by retired Gen. Renato de Villa of the Filipino War Veterans and PVAO.

Helping in the project was Licuanan’s way of honoring his father, Brig. Gen. Francisco Licuanan Jr., an officer in the US Army Forces in the Far East.

Based on accounts of Filipino fighters, it was the US Army that decided which claims for benefits were valid under the Philippine Guerrilla Recognition Program, which initially ran for two years.

The US Army, according to Vallejo, was methodical in data gathering as to who fought before the Allies returned and during the “liberation” of the Philippines from the Japanese.

“They interviewed commanding officers from various related units, civilians in the area and other guerrilla leaders. One of the requirements was that the guerrillas had to be a fighting unit. They could not just be on the roster of a unit and then go home and wait to be called back. They had to be together at camp, drilling, fighting and doing military intelligence work,” he said.

More information came in as guerrillas provided proof, including affidavits, the history of their unit, birth certificates, photos, letters, maps and propaganda.

“The men could be embellishing to get the benefits but if two or more men talk about the same names and events, then there is some truth to it,” Vallejo said.

(Next: More PH files not yet accessed)