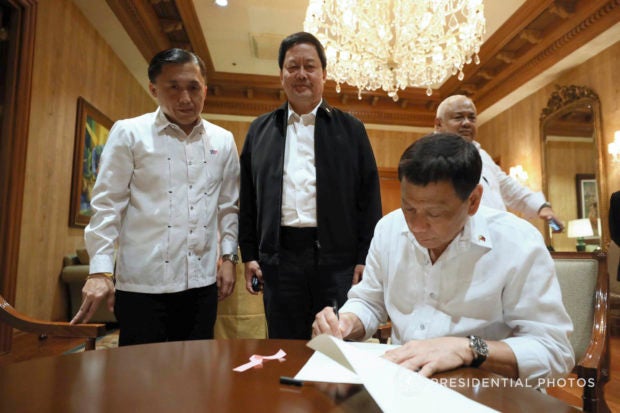 The sudden change in the leadership at the Department of Justice (DOJ) may throw off-track Janet Lim-Napoles’ bid for freedom.

New Justice Secretary Menardo Guevarra on Sunday discounted the possibility of him following the missteps of his predecessor, Vitaliano Aguirre II, which included meeting with a lawyer for Napoles and his grant on Feb. 27 of temporary government protection to the alleged mastermind of the P10-billion pork barrel scam.

Guevarra said he would rather let state prosecutors talk with Napoles’ lawyers, led by Stephen David, a known supporter of President Rodrigo Duterte.

He said he would also review the decisions made by Aguirre, including the grant of state protection to Napoles.

“I will also review [the] previous DOJ actions on Napoles,” he said.

Aguirre said Napoles’ provisional admission to the Witness Protection Program of the DOJ was in preparation for a tell-all testimony about the elaborate scheme to pilfer money from the Priority Development Assistance Fund, a pork barrel that financed lawmakers’ projects.

David divulged Aguirre’s action when he asked the Sandiganbayan to order the transfer of his client from a jail at Camp Bagong Diwa in Taguig City.

Interestingly, Guevarra is a known associate of Executive Secretary Salvador Medialdea, who had blasted David for naming Medialdea and Aguirre as the ones who had instructed him to bring the petition to the graft court.

Prior to his appointment to the DOJ, Guevarra served as Medialdea’s senior deputy at the Office of the Executive Secretary in Malacañang.

Aguirre later admitted that he and Medialdea had indeed met with David, but maintained that they merely gave an “opinion, not advice,” to Napoles’ lead lawyer.

The executive secretary, on the other hand, flatly denied David’s claim, saying: “Why would I give a legal advice to a lawyer for his client? If I were his client, I [would] fire him.”

Last week, Aguirre decided to end his nearly two-year stay at the DOJ, a stint rocked by scandal after scandal, the most recent of which was the junking of drug charges against Cebu businessman Peter Lim, whom the President had identified as a triad boss, and several other suspected drug traders due to weak evidence presented by the police.

Among the respondents in that complaint was Rolando “Kerwin” Espinosa Jr., who admitted during a Senate inquiry into the illegal drug trade in 2016 that he was a drug dealer.

Aguirre had braved public rebuke of his decision to go soft on two former immigration commissioners who were accused of demanding P50 million in payola from Macau-based casino mogul Jack Lam.

The two immigration officials, who happened to be fraternity brods of Aguirre and the President, have since quit and are now facing plunder charges in the Sandiganbayan.

Aguirre, previously referred to by the President as his “bright boy” law school classmate at San Beda College, had also been criticized for his erroneous accusation that some opposition lawmakers had colluded with two influential Moro clans in plotting the terror attack on Marawi City last year.

This early, Guevarra assures critics of the President that he will observe the laws and jurisprudence in handling criminal cases brought against them.

“I will treat these cases [against them] like any other cases. [I will] follow the rule of law,” he said.

Guevarra also said his powerful position would not get in the way of his personal views and conduct as a lawyer. “I’ll just stay the same way I have been all my professional life,” he said.

Added Guevarra: “[I will] act fairly and prudently, and offer all my work for the greater glory of God and country.”