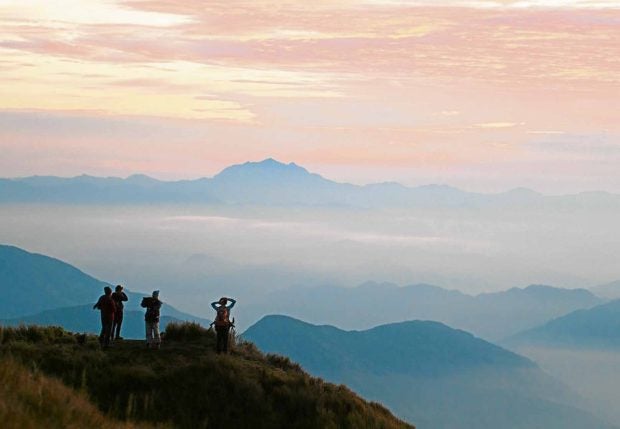 LUZON’S HIGHEST Mt. Pulag, a favorite of trekkers, is sacred to the Ibaloys of Benguet province who believe that their ancestors’ spirits dwell there. —RICHARD BALONGLONG

BAGUIO CITY — A survey team probing the impact of a Jan. 20 fire in Mount Pulag that destroyed nearly 6 hectares of vegetation, including endemic dwarf bamboo, had found evidence supporting the initial finding that trekkers had started the fire.

The team, sent to Luzon’s highest mountain by the Department of Environment and Natural Resources (DENR), found trash but the most telling piece of evidence that trekkers were to blame for the fire were butane canisters.

Pieces of paper were also found by the team among the trash that littered the fire site, according to a report presented on March 18 to the Protected Area Management Board (PAMB), an agency under the DENR.

The fire was triggered by a damaged butane stove that a group of trekkers hurled into the grasslands at the Akiki-Tawangan area, known as the Saddle Camp.

The DENR has yet to issue a new policy on the use of stoves in campsites in Pulag or on allowing trekkers to penetrate deep into the mountain.

He said PAMB was reviewing guidelines for the entry of visitors to the park, which is home to mossy forests and endangered plant and animal species.

The area damaged by the fire was home to grass and the rare dwarf bamboo, which thrives only at an elevation of 2,900 meters.

He said dwarf bamboo needed six months to a year to fully grow.

Leonard Soriano, geographer who led the survey team on Feb. 15, said these types of foliage might have “influenced the speed with which the brush fire moved and consequently the size of the burned area.”

The team found piles of garbage when it flew a drone to create an aerial map of the burned area.

Soriano said 349 images taken by the drone were put together to form a high resolution image to help guide future park management and the formulation of conservation policies and processes “not only in Mount Pulag, but also in other parks with similar ecosystem or environment.”

The blaze damaged 1.5 percent of the 387-ha grassland of the Mount Pulag National Park, which spans 11,550 ha.

The burned area is about the size of the 11-ha University of the Philippines Baguio campus.

While the Akiki-Tawangan area remained closed to trekkers, the park was still accessible through other pathways.

During peak season, the mountain draws 300 to 400 hikers at any given time. —Roland Rabang and Kimberlie Quitasol