Sereno wants De Castro out of quo warranto case; accuses her of ‘being biased’ 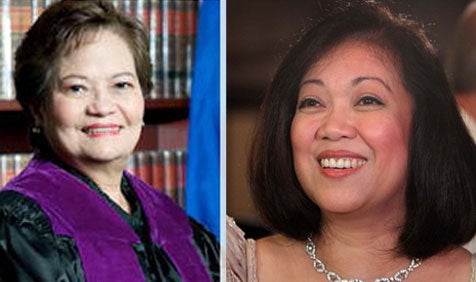 In a statement on Friday, Sereno’s camp said they have filed a 30-page motion stating that De Castro had already “prejudged” the issue concerning the validity of her appointment to the top judicial post.

Sereno’s qualification as Chief Justice was being disputed in the quo warranto petition filed by Solicitor General Jose Calida seeking to remove her from office.

Quo warranto is a special form of legal action used to resolve a dispute over whether a specific person has the legal right to hold the public office that he or she occupies.

“With due respect, the Chief Justice has reasonable grounds to believe that Justice Leonardo-De Castro had already prejudged the issue regarding the validity of the Chief Justice’s nomination and subsequent appointment in 2012,” Sereno said.

“It would be contrary to normal human experience for her (De Castro) to suddenly repudiate her conclusions that the Chief Justice was ‘disqualified,’ especially when her conclusions were made under oath,” she pointed out.

Sereno said that De Castro, under oath, had told the House committee on justice that she was disqualified from being Chief Justice for failing to submit to the Judicial and Bar Council (JBC) her Statements of Assets, Liabilities and Net Worth (SALN) when she was a University of the Philippines (UP) law professor.

In addition, Sereno also claimed that De Castro had a “personal interest” in the outcome of the quo warranto case, having been a witness against her during the impeachment proceedings on the complaint filed by lawyer Larry Gadon.

“Considering her high profile and spirited public participation in the impeachment proceedings against the Chief Justice, she should, with due respect, bear in mind that her decision ‘to sit or not to sit’ on this case will affect to a great extent ‘the all-important confidence’ of the public in the ability of this Honorable Court to render justice impartially,” the chief magistrate added.

Should De Castro refuse to inhibit, Sereno said that it would be a violation of her right to due process under Article III, Section 1 of the 1987 Constitution.

“In cases of compulsory inhibition, it is conclusively presumed that the judge cannot render judgment impartially or objectively. The judge cannot insist on hearing the case without willfully violating the Constitution,” the Chief Justice said.

“It does not appear that Justice Leonardo-De Castro can decide this case with the cold neutrality required of an impartial judge. Independent of such presumption, it is respectfully submitted that there is clear and convincing evidence to show that she has prejudged the very issue in this case to the respondent’s prejudice,” she stressed.

Sereno earlier filed four separate motions for inhibition against four of her colleagues in the SC.

Sought for their recusal are Associate Justices Diosdado Peralta, Lucas Bersamin, Francis Jardeleza and Noel Tijam. All of them testified against the Chief Justice in her impeachment case pending before the House of Representatives. /jpv

Read Next
Roque: NFA Council will not be abolished
EDITORS' PICK
WHO says not to use ivermectin on COVID-19 patients
Speed up your game with the new vivo Y20s [G]
Pru Life UK receives four golden arrows for solid corporate governance
PH’s COVID-19 active cases reach over 190k after 12k new infections reported
Harry Roque in hospital for COVID-19 treatment
Pre-order the new vivo Y20s [G] to get a free TWS earphone
MOST READ
Stop ‘creeping occupation’ of ‘militia’ boats in WPS, Pacquiao asks China
Bea Alonzo clarifies status of her relationship with Dominic Roque
Convicted former aide of Sen. Bong Revilla dies — BuCor
Locsin to China: ‘Then move out’
Don't miss out on the latest news and information.