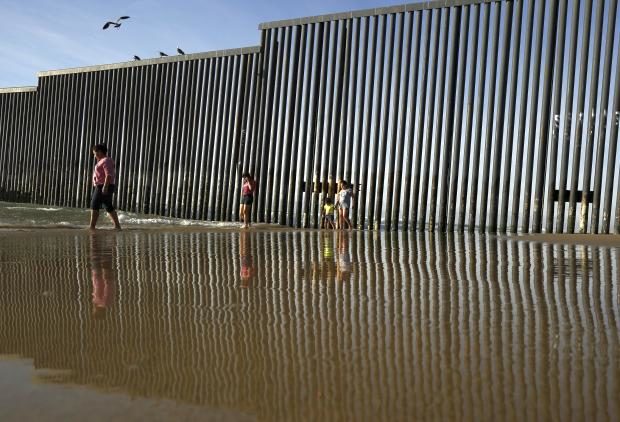 This photo taken on February 1, 2017 shows the border structure separating San Diego from Tijuana, Mexico, reflected in the Pacific Ocean as people walk along the beach in Tijuana. The Trump administration has proposed spending $18 billion over 10 years to significantly extend the border wall with Mexico. The plan provides one of the most detailed blueprints of how the president hopes to carry out a signature campaign pledge. (Photo by GREGORY BULL / AP)

United States President Donald Trump has ordered the National Guard to deploy to America’s southern border, ratcheting up pressure on Mexico and taking another step in his quest to clamp down on illegal immigration.

Trump’s latest border move on Wednesday came the same day as a caravan of Central American migrants – whose trek across Mexico had infuriated the US president – scrapped their highly publicized plans to try to enter the US.

Homeland Security Secretary Kirstjen Nielsen said Trump had directed the Pentagon and the Department of Homeland Security to work with border state governors to figure out how to deploy National Guard forces to assist Border Patrol agents.

“The president has reiterated this many times: A sovereign nation that cannot – or worse, chooses not to – defend its borders will soon cease to be a sovereign nation,” Nielsen said.

“We do hope that the deployment begins immediately,” she added. “Today is the day we want to start this process. The threat is real.”

The sudden action, which comes as lawmakers are out on Easter break, follows Trump taking to Twitter to rail against “ridiculous liberal” border laws, and warn of an inbound “caravan” of immigrants, threatening to axe the North American Free Trade Agreement (NAFTA) if Mexico did not stop them.

Caravan leaders on Wednesday said most of the group – about 80 percent – would now remain in Mexico, where authorities are working with individual migrants and families to get temporary papers.

“All they want is a place to live in peace, where they can work without having guns pointed at them, without being forced to join a gang,” said Irineo Mujica, the head of migrant advocacy group People Without Borders (Pueblo sin Fronteras).

Mujica said a handful of migrants with strong asylum claims will continue to the US border on their own.

“Donald Trump wanted the world to crush us, to erase our existence. But Mexico responded admirably and we thank the government for the way it handled this caravan,” Mujica told AFP in the town of Matias Romero, in the southern Mexican state of Oaxaca.

Trump has ratcheted up pressure on both Congress and America’s southern neighbor Mexico in recent days to take action to stem illegal immigration.

“Until we can have a wall and proper security, we’re going to be guarding our border with the military,” Trump said on Tuesday, referring to his financially challenged pet project to build a wall along the frontier.

The commander-in-chief’s seemingly off-the-cuff military directive caught Pentagon officials by surprise, and planners scrambled to find ways to support the edict on Wednesday.

She and other administration officials boasted of a “Trump effect” that saw illicit border activity drop when Trump took office, but said the numbers of illegal border crossings had now risen back to previous levels.

In Mexico, the 1,000 or so migrants who currently make up the caravan – many traveling in families of up to 20 people – have been camped in Matias Romero since the weekend, deciding their next move.

The group, mainly Hondurans, also includes Salvadorans, Guatemalans, and Nicaraguans, mostly fleeing the brutal gang violence that has made Central America home to some of the highest murder rates in the world.

The caravan is in fact a yearly event held since 2010 and its goal is more to raise awareness about the plight of migrants than to reach the US – though some participants have traveled to the border in the past.

Mexico’s former foreign minister, Jorge Castaneda, called Trump’s reaction to the caravan “a little hysterical,” telling Mexican radio that he suspected the US president was more worried about his Republican party losing this November’s mid-term elections than the migrants.

“He’s just mobilizing his conservative base,” he said.

The caravan, which set off on March 25 from Tapachula, on the border with Guatemala, now plans to travel to the central city of Puebla for a conference, then on to Mexico City for a series of demonstrations – and end its journey there.

The Mexican government, which bristled at Trump’s criticism and his move to militarize the border, said on Monday that it was up to the US  to decide whether to admit such arrivals or not.

Many of the migrants said they had no intention of trying to enter the US.

Carol Torres, a 26-year-old Honduran woman, told AFP she joined the caravan after her abusive husband hired gang hitmen to attack her, forcing her to leave her two children behind.

She said she planned to settle in Tijuana, on the Mexican side of the border – not cross into the US.

“I don’t believe in the American dream, because the president over there is a son of a bitch who doesn’t like immigrants,” she said.             /kga