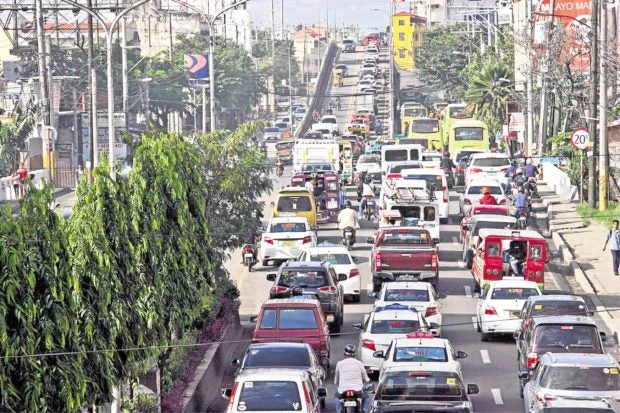 CEBU CITY — The unresolved traffic congestion in Metro Cebu has resulted in at least P1.1 billion in economic losses a day, according to initial results of a study being conducted by the Japan International Cooperation Agency (Jica).

Gordon Alan Joseph, Cebu Business Club (CBC) president, presented the findings in a forum on Tuesday, which was also attended by officials of the Regional Development Council in Central Visayas (RDC 7) and the Metro Cebu Development and Coordinating Board (MCDCB).

“Can we afford this kind of traffic and this kind of nonplanning? What we’re experiencing today is a result of poor planning,” said Joseph, also co-chair of MCDCB.

Initial findings of the “Master Plan Study and Institutional Development on Urban Transport System in Metro Cebu” were presented by the Jica team that included Rene Santiago, a Filipino transport expert, last week. The study is set to be completed in the last quarter of 2018.

Joseph pointed out how infrastructure projects, like the ongoing P683-million underpass along N. Bacalso Avenue by the Department of Public Works and Highways (DPWH), were being implemented without proper traffic management plans.

He said the project was unnecessary, noting that the traffic mess being experienced by residents in Metro Cebu’s south district could have been avoided.

“We in the Cebu Business Club, we in the business sector, we in Mega Cebu, we are tired of this. Mega Cebu has come up with some great recommendations on how to proceed with planning. Why were none of our plans, created by experts, even considered when DPWH comes up with their programs and projects?” he said.

Among the recommendations by Jica, contained in the study, “Mitigation Measures for Traffic Bottlenecks,” done in March 2016,  was for officials to start with “less capital-intensive” projects to address congestion along 20 intersections within Metro Cebu.

This was the same study cited by Kenneth Cobonpue, RDC 7 co-chair, and Glenn Soco, RDC 7 infrastructure development committee head, when the council decided not to endorse P16-billion worth of additional “depressed structure” and “underpass” projects in five areas for budget consideration in 2019.

“There is a master plan and there is a sequence to doing things. Our politicians pick out the biggest projects for obvious reasons. Why this has gone through for several years is because of fear. People don’t want to go against politicians,” said Cobonpue, a businessman who was appointed by President Duterte to head RDC 7.

During a council meeting in March, Rep. Raul del Mar of Cebu City’s north district, walked out after he discovered that his projects were not endorsed.

“We’re here and we are not scared. We have been accused of being obstructionists. I have been called a peddler of overpriced chairs. At least, I don’t peddle overpriced underpasses,” Cobonpue said.

Council officials, citing Jica recommendations, said the priority traffic-related project that should be done in Metro Cebu was the modification of “geometric designs and traffic signals,” which included flaring or widening of intersections to enhance road capacity.

Second was the improvement of area traffic control through synchronized traffic signals and area-wide traffic control system. The third recommendation was “grade separation” or the construction of underpasses or flyovers, while the fourth was road widening.

Aside from the underpass project along N. Bacalso Avenue, another underpass is set to be implemented by the DPWH along UN Avenue in Mandaue City, which connects to the Marcelo Fernan Bridge going to Lapu-Lapu City.

The P711.8-million project had been awarded to a contractor in December last year and had been scheduled for construction starting the third quarter of this year.

Joseph had warned that once UN Avenue had been ordered closed for three years for the underpass construction, the local tourism industry would die.

“New investors in the airport will lose money,” he said.

The P17.5 billion new Terminal 2 of the Mactan Cebu International Airport is set to open in June this year and expected to triple tourist arrivals in Cebu.